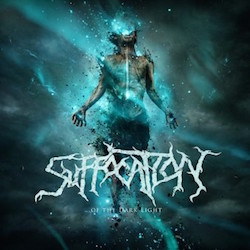 ::   ::
Type: Full-Length
Release Date: June 9th, 2017
Label: Nuclear Blast
Genre: Death
1 Clarity Through Deprivation
2 The Warmth Within The Dark
3 Your Last Breaths
4 Return To The Abyss
5 The Violation
6 Of The Dark Light
7 Some Things Should Be Left Alone
8 Caught Between Two Worlds
9 Epitaph Of The Credulous
MetalBite on YouTube

Suffocation bring a brutal style to the table. The riffs here are cavernous and invoke immediate pleasure. However, they aren’t quite interesting enough to completely enrapture the listener. Instead, they weave a slow and punishing aura around you. This is music that makes a jackhammer like presence available.

There is an ability to make for headbanging moods with the music. However, it is not punishing enough to do anything more than that and sticks to a mid temp throughout. This medium pace seems to be what Suffocation enjoys working with and they bring forth an average momentum at most occasions. The guitar riffs are produced fairly clearly to have a moderate impact upon the listener. There isn’t anything to become overly excited about, however, as the music can be slightly generic at times. Don’t think this is at the same level as something like Six Feet Under, however, because this band is more interesting than that. There is brutality present with the band, but they are able to make their songs complex enough that they are quite listenable. This makes for an exciting form of death metal writing. It is quite enthralling to hear a balanced death metal outfit perform to the maximum of their potential. The balance between chaos and technicality makes for something entertaining to listen to at all times. It also offers a well-rounded viewpoint to a band that some people might think is one-dimensional.

The music still isn’t the most varied ever and becomes somewhat monotonous on further listens. Still, there is enough variation to make for a quality death metal effort. Compared to other releases from the genre by the likes of Morbid Angel and otherwise, this stacks up favorably. It doesn’t surpass the best of Morbid Angel, but there is enough to like to make ...Of Dark Light surpass the last couple of efforts from that band.