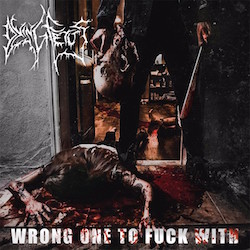 Dying Fetus’ last albums are lethal and since Descend into Depravity which was a great album, they just have got better and better. Reign Supreme was an excellent follow up and Wrong One to Fuck With is the cherry on the pie; probably their best record since Destroy the Opposition, my favorite album from the band. The band’s work is very professional both in studio and live since the release of their 2nd LP, so you get what you expect from a band with such credentials: top quality brutal death metal with hardcore influences.

Composition wise they follow the same formula that made them famous, maybe just adding an apex of melody. Slow paced sections are often still there, with their groove and heaviness in all their glory. Mixed with those breakdowns we can hear killer riffs introduced by the guitars and then marked violently by percussion, followed by frantic blast beat sections performed at hyper speed. Soloing, tapping and sweep picking sections are rather technical and amusing, keeping some balance between melody and aggression. The bassist does an excellent job following the guitars, considering those figures are harder to play on bass due to the size of the frets. Hardcore punk riffs show up occasionally; adding variety to the sound of the band that has so many different textures.

The production of the album is super modern and professional, the mix is super balanced; bass guitar tone can be fully appreciated, it has a smooth distortion and it's equalized so that the sound of the string hitting the fretboard gets in the high end of the mix. It's also super thick and crunchy, all these details help the bass to cut through the sound of the rest of the band while serving its purpose as a companion for the six strings. Guitars are down tuned as hell but their lows don't collide with the bass, its distortion is super raw and sharp but has 0 ground noise or analog feel on it. The sound of the drums is pristine but not over produced, it still appears human with a brilliant technique, precise as a Swiss watch. Brutal and elegant at the same time. The vocalist is on top of his game on this album, his growls are super low and deep and sound totally frightening. This modern production style fits the sound of the band perfectly.

I found very interesting that a band can reach a second peak of creativity after all these years around, that's the difference between commercial bands that play for money and real committed musicians that play because they love it and don't give a fuck about the rest. Total respect for these guys.

Dying Fetus have ALWAYS been the wrong ones to fuck with. With a name like Dying Fetus, you've pretty much forsaken any form of commercial success from the very get go. John Gallagher, being the badass he is, doesn't care about that. Dying Fetus is Dying Fetus. They've always pumped out quality albums, some better than others, but there has never been a weak one. And this one is on the higher spectrum of albums they have released throughout their 26-year career.

First thing to note - the old Dying Fetus logo is back. YES.

Second thing to note - gruesome album cover. In fact, John had a whole different idea for the cover, which involved a woman's torso with her organs hanging out, but Relapse stepped in and said no. Don't go soft on us now, Relapse!

It's also great to see that Dying Fetus have had the same stable line up for ten or so years now. Trust me, death metal line ups don't get much better than this. Still a three piece, the boys from MD can make enough noise to make you go deaf for a few days. I've seen them live and it was quite the experience. If they stroll through your town, prepare for decimation. Don't miss it.

Onto the music, and this one is an easy one to review honestly. The band pick up from where they left off with Reign Supreme, but actually give it a few more shots of adrenaline. The songs on here are angrier, faster, more technical and just flat out more fun to listen to.

Dying Fetus has always been a band known for their stellar guitar work (you have John to thank for this) and here it's no different. The riffs cut and slash, grind and pound, skewer and impale. Just the right amount of technical wizardry mixed in with John's trademark bouncy riffs. Sean puts in a stellar performance as usual, and Trey just beasts through this rock-solid slab of metal. The vocals are top notch. They are always top notch with Dying Fetus. Both John and Sean sound great.

The songs themselves as I stated earlier are more fun to listen to than on Reign Supreme, and that's mostly down to the arrangements. The songs have enough content in them to keep you interested, enough twists and turns so you don't really know where you'll be ending up next, but when you get there it makes perfect sense. I only wish the sound production would be a bit punchier (Reign Supreme sounded amazing), but this still sounds pretty great as it is. You'll want to turn up the bass a bit on your home system, however.

I'm not going to go into detail about particular songs or sections like I usually do, because there is simply so many of them. You'll just have to throw on a good set of headphones and enjoy all the intricacies for yourself.

Always worth the wait, Dying Fetus never fails. Never. Like I said before, they are ALWAYS the wrong ones to fuck with.

Standout tracks: Panic Amongst the Herd, Die With Integrity, Reveling in the Abyss, Seething With Disdain, Unmitigated Detestation.

Ugh, the production on here is too flat, that's why I deem Reign Supreme (2012) to be a better sounding album mixing/sound wise. But the riffs are about as good as on here than they are on Reign Supreme. Their predecessor is probably their best that they've ever put out. But to those who give this album a better rating, they may argue that the guitar licks are better here. I disagree. For a band that formed in 1991, they still have it, though most of the original line-up is gone. This trio is what remains and yes despite the flat out appeasing comments I've thrown into this introduction, I did like the album.

You get a better listen to what's going on in the guitar department here than if it's coming out of your boom box or stereo. It's just everything is intensified, on here it's just a flatter sounding record and the guitar tone is a little bit less than good. I like the licks, but I don't like the guitar vibe. It doesn't sound as good as when they did on Reign Supreme. The arpeggios are still whizzing up and down the fret-board, but they're not with as much precision. The pig-sounding down picked riffs alongside the vocals fit well. But is album is no "God" or an album that they've put out. Some people tend to think, "well, oh yes this is the best they've done in years." I disagree.

Listen to Reign Supreme compared to this one and make your determination. So getting to the music, they do a lot of crazy fret-work it's just not their best. They should go back to the Dying Fetus basics here and keep the trio, just remember what their last album was like, you'll get the vibe.

Tempo changes all over the place and the combination between the deep growls along with a little variety makes it more appealing. But the production is just crap, they have a box-like recording. I'm not exaggerating. If people think I'm overstepping the mark in what I'm saying, I say well "listen to the album and compare it to the last record, what do you hear the most difference between those two?"

I would download this album first on Spotify or listen to some songs like "Die With Integrity" and "Weaken the Structure." I don't suggest to run to the store and make a purchase with it. That way you'll not be disappointed in case you ignored my review of this one. Wrong One to Fuck With was somewhat of a disappointment to me.