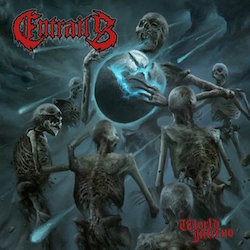 Brutal Swedish death metal in the vein of Entombed, though this one has a little more insane vocals. The guitars are heavy and the atmosphere totally grim, dark, depressing. This is one of their heavier releases. The old school Entrails reflected solely that of Entombed, almost a replica. But now it seems like they're venturing away from their roots and coming into their own. World Inferno is a combination of growling/screaming, insane guitars, pounding drums and furious tempos. The production quality on this is quite good. I think it does the band justice in that department, more so than past releases.

The music on this release is probably the highlight of the album. There are just so many fluctuations in the guitar riffs but the Swedish vibe is stil there. I think that they really did a good job in all areas. A fluctuation between vocal styles but the death metal never ceases to amaze me. I'm surprised not many people have found this band. I found them by accident. But I feel that I was bound to anyway. So yeah, the production quality, music, vocals, mixing and pure Swedish death metal was all superb. This is one of those albums you just can't get sick of. I say that because I've been listening to it for some weeks now and I'm still playing it.

I think the main difference as to their last few releases is that they've shied away from the total duplicate of Entombed and now are on the path of their own sound. Sure the guitars are still similar that's just the maybe (if they recorded there) Gothenburg type of recording. But they play death metal, not melodic death. Their music on World Inferno can't be compromised. I have nothing but good things to say about this release. Every track is good and dark. The atmosphere again is purely evil and the vocals enhance that sense of vibe. I would say that owning the physical CD now is showing the band that I have respect for them and what they do.

If you're still unsure about whether or not to check this out or not, I would say to go on Spotify and download it. You might be amazed right away because these guys are passionate at what they do. All the tracks on here are good so I can't single out any one that I like over the other. Or you can check YouTube for songs or maybe even the album is on there now. Nevertheless, the band has that certain likeness about them which draws you into their core of death metal. Their best one to date in my opinion. They just keep getting better and better whereas some bands regress. That's all I can say about that. Get this one immediately!