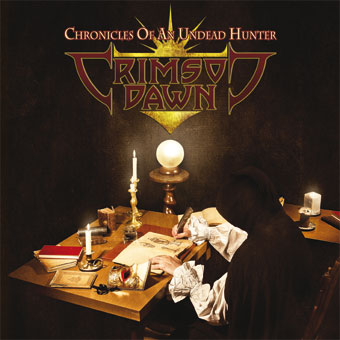 Crimson Dawn performs an epic form of traditional doom. The band plays a style similar to Black Sabbath and Candlemass, but there are also parallels to the new Pallbearer to be found here. The ability to compare this band to many doom acts credits them strongly as a band.

The gloomy, downtrodden riffs here are gleaming and powerful. It is a combination that doesn’t necessarily make them positive sounding, but makes them epic and addictive. The band is perhaps most similar to Candlemass, even in the singing. This is doom that forms the foundation for the genre. One can see the typical sounds of the genre in the song Skeleton Key, for example. Musically, there is something to like in all aspects here. The vocals are sharp and poignant and help the music. The riffs are strong and resonate with the listener. Add in some solid drumming and the musicianship is of a high quality.

It is really the deep, dark riffs that steal the show, however. They are simply a joy to behold and make the music more moving each second. The album really sticks to a similar formula for the majority of its length and makes sure to ingrain it into your brain. The music is epic, yet very structured and certainly worth of the traditional vibe. If there is any problem with the music it’s that it’s somewhat unoriginal. This style has been performed before and done slightly better if one only looks at the classic Nightfall album from Candlemass. Still, the band nurtures this type of music.

They make the doom guitar riff cool again and proceed to throw a number of them into your face. One will only come out loving the doom genre again even if it is a little too similar to the masters. Chronicles of an Undead Hunter is strongly recommended doom metal.