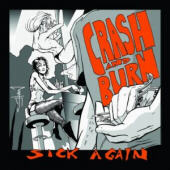 Crash and Burn is a new entry in the growing assemblage of bands that are putting out music that is riff-driven, rock-rooted and raucous enough to inspire masses to start drinking bourbon straight from the bottle.

Although the music isn't as heavy as whiskey-metal faves like Alabama Thunderpussy or Superjoint Ritual, it totes the same attitude of desire for wonton fun in any decadent format available. Sex, Drugs and Rock n' Roll seems to be the writing on the wall for the riffing indulgence anthems like 'Go Down' and 'Graveyard Shift'.

Crash and Burn doesn't bring a whole lot new to the table, but the dirty screaming vocals and chunky head-bouncin' guitars are compiled with enough talent to get in touch with your visceral need to snatch up an air-guitar and seriously lay waste to your living room as your best bud sprays a forty all over the walls.

This band is helping bring some raunch back to the hard rock and metal scene on a similar but less theatrical scale as the bad-boy metal of the eighties. This isn't a pretentious album by any means; the guitar licks and solos aren't forced, the drum fills aren't excessive, the vocals attempt nothing but what is raw and natural and it all comes across even better after a couple of three foot bongs. And that, my friends, is what makes this an album worth your ten bucks.

Fans of blistering and wild rocking guitars will be sated without question by the third song, but the album continues with one slashing track after another without an overdose of middle-finger antics that have been stripped to the bone by all genres of music in the nineties.

Bottom Line: Get your T-Bird, get your girl, get drinking, get smokin', and get freakin' sick again!