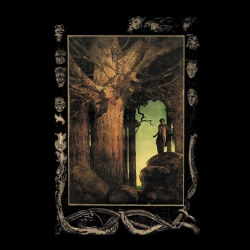 Type: Full-Length
Release Date: February 7th, 2015
Label: Ars Magna Recordings
Genre: Black
1 Entranced By The Unknowing
2 Taking The Auspices
3 Amongst The Forlorn Larch
4 Fragments Of Spectral Uncertainty
5 Shaped By Aeolian Winds
6 In Absence Of The Eternal
7 Captured Within The Annulus
8 The Gate Of The Firmament
9 Spiritrise
MetalBite on YouTube

Black metal is a multifaceted genre : It can be raw, harsh, and hate-filled but also full of atmosphere and beautifully composed soundscapes. It's a form of music that covers a lot of bases and appeals to a wide variety of individuals. Pennsylvannia's  Haethen certainly draw many influences from all the grand shapes and forms of black metal on Shaped By Aeolian Winds.

For a debut full-length album, it has a very mature and experienced sound. Relying heavily on intense atmospheric song structures, it has a very nice flow from start to finish almost as though the album is one long track instead of nine individual pieces. There's a very obvious Cascadian style black metal vibe combined with one of pagan/nature worshipping black metal:think early Enslaved meets Wolves In The Throne Room who also meets Drudkh.

As far as the production and recording quality is concerned, there is very little to complain about. It would've been nice to have the bass a bit higher up in the mix but other than that small hiccup, everything is very present in the mix. On each listen, there's something new to catch your attention. The creativity on this album is never ending and makes for a very enjoyable listen from start to finish.

If it had been released this year, Shaped By Aeolian Winds would very well had made my Top 10 Albums of 2017 list. The initial listen was a very pleasant surprise to my ears and I look forward to future Haethen releases.