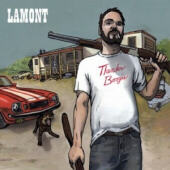 I'm willing to bet that what Lamont had in mind when recording "Thunderboogie" was to cram a lit long-wick stick of dynamite up Charles Manson's ass, hand him a shotgun and let him loose in a whorehouse... with party hats.

Lamont was bordering on unimpressive when I first listened to the album. I knew there were some elements that I was hearing that needed a second listen. The same effect occurred on the third through seventh listens, at which point familiarity helped develop an emotional appreciation and attachment to the music, like becoming one with a roaring Hemi 'Cuda pushing 110 mph on dirt roads.

The more I listen, the better the thrill. This is a quality that is highly unusual in the hot-rod lush-head metal bands that are starting to arrive in droves today: lasting ability.

Admittedly, this album can be hard-pressed to be heard as a metal band, but who the hell cares? The destructive attitudes, monster sounds and rage of chords is enough to satisfy the devil inside.

This album isn't about technicality or bludgeoning priests with meat mallets; it's about throwing empty beer bottles, getting your boot stuck in a plaster wall and shooting shotguns out of the back of a beaten pick-up truck at 3 am while careening through the woods.

This is the fun these boys like to have, and a chance for some of you from planet Timid to live vicariously as drunken, wild guitar fans that throw friends through windows.