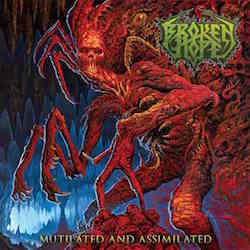 This is the most admirable (aside from Loathing) release that Broken Hope has come out with in years. Mind you, they did split in 2001 from the metal scene then came back with a new line-up with exception of Jeremy Wagner who has been with the band since they formed in 1988. While a lot of death metal bands struggle to find their own unique sound, Broken Hope creates their own cool vibe to their music. I was surprised how many times I did actually listen to this album before I chose to write about it. However, in my opinion, it's close to perfect in what a newer death metal album should be like.

New members come from different bands such as Jungle Rot, Earthburner, Disinter, Disgorge etc so these guys know how to transpose good death metal. I'd have to say that from what I've heard of 2017 releases, this one has to be one of the top albums. I should warn you regarding the lyrics though, they are sort of Cannibal Corpse-esque. "Tom" Leski spews forth his annihilation on vocals and these type of words fit well with an album that's coming out simply brutal. They write about not so colorful topics but it includes gore, death, sickness and Anti-religion. Upon reading the lyrics to this one, they're pretty brutal to say the least. That's what Mutilated and Assimilated is all about. No real grindcore here though, there is some moderate blast beating and I might say that the lead and rhythm guitar sound phenomenal not to mention the production quality sounding crisp upon awakening. No doubt Broken Hope did a great thing for the metal community this time around and we no longer have to dig into the past of the Loathing days to hear something good from them. Mutilated and Assimilated  is here.

If you stumble on this release, be sure to check out "The Meek Shall Inherit Shit", "Malicious Meatholes" and "Blast Frozen." Those are some of my favorite songs on there. Support the band by buying the physical copy of the CD. This Chicago based band deserves high praise from a long awaited return!!