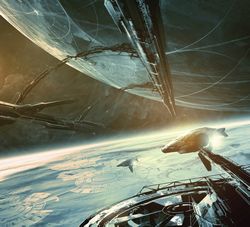 When looking through tons of submitted promos, an amazingly interesting musical bite fell into my paws. oltreLuna is the second album, and the third official release of this Italian trio signed by Avantgarde Music. This interplanetary digipak hides more than 55 minutes of hard to define music. I am a representative of the part of that particular group of homo sapiens, which spends most of their lives surrounded by music. I absorb quite a lot of different genres of it, but my metal-laced taste does not always acknowledge the avant-garde bands. Is Progenie Terrestre Pura avant-garde? In a sense, YES but is it still metal? Three times YES! If we agree that Nocturnus in their space death metal were reaching Mars, then PTP’s atmospheric / electronic black metal soars far beyond the boundaries of the solar system.

Music offered by those Italians is characterized by high levels of emotion and energy. In the elaborate compositions you can hear the echoes of their debut U.M.A., but in all this melodic / electronic / industrial insulation there is more brutality and black metal hooks. Instruments were extracted from electronic boxes. Even programmed drums sound more natural here. We have the impression that the classic BM band is decorated with sci-fi samples. In the beginning of 'Pianeta.Zero', after a short introduction we get a black metal kick in the butt, which, as if in the rain of asteroids, weakens and grows. Those hoarse guitar sounds have such power! The second song slams you in the face from the very beginning. Whoever survives it will have the chance to regenerate in the latter part of this number. There are cosmic tastes there that intertwine with the ethnic ones. The title track is a continuation of the ethnic / shamanic sounds of the new civilization, but with good pounding after less than 3 minutes of play. 'Deus.Est.Machina' opens with electro-sci-fi sounds just to remind you after a long stretch about the power of angry black. Also in the finishing 'Proxima: B' after a quiet start the Italians vent off the accumulated energy. Although "B" is supposed to be a planet of the earthly type, there is no peace and quiet to be found there. More than 15 minutes of contact with the vision of being on it shows its beauty, but also the hostility of new beings. That's oltreLuna for me.

What do I like and appreciate on this album? For the atmosphere - a little nervous and restless. Sometimes beautiful but brutal, as befits a chunk of black metal. For energy – it does not lull us with its atmosphere. No boredom in there! For a very characteristic for black metal harshness. Is it a record for everyone? Certainly not. I was torn to pieces by this play on melody of emotions and energy, so I encourage everyone to check out if the musical post-black-fantasy dose served by this Italian trio will work just as well for you. Listen to this album loud! I'm going to enjoy this album some more, so see you somewhere in the interstellar space.