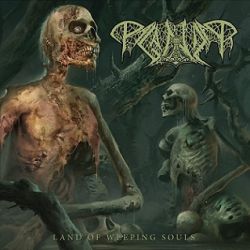 Do you enjoy heavy riffs? Do you also happen to like Swedish Death Metal? If you answered yes to both questions, chances are you will be truly entralled by this latest full length release from Swede-bangers Paganizer.

Swedish death metal will always have a special place in my heart. Most metal fans without broken ears will agree with this sentiment. Paganizer are a band who are highly prolific and consistently enjoyable. Land of Weeping Souls will be a treat for long time fans and easily appealing to anyone hearing a Paganize album for the first time.

Released just a year after the crushing On The Outskirts of Hades EP, Land Of Weeping Souls is 35 minutes of unrelenting and punishing death metal that is truly hellbent on destroying everything in its path. Paganizer have always had a curious quality to them, a sort of mechanical feel to their overall sound. By no means is this meant as a dig, but rather, the band operate efficiently and quickly which results in songs that are short and to the point.

For a band that is ten albums deep into their career, it seems as though Paganizer are getting heavier as time passes. Land Of Weeping Souls is one death metal album that shouldn't be overlooked and will surely hold the test of time alongside their previous releases.