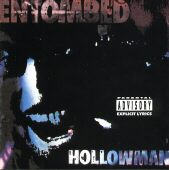 This EP was my first contact with a style I will probably never fully understand, death 'n' roll. Does anybody know what death metal has in common with rock 'n' roll? Lemmy, can you help me? In my eyes, this bastard genre is a relatively superfluous invention. I can confirm that these six tracks deliver much more death metal than any kind of whatever roll, but the fact that exactly the title track had this rocking tendency left an ambivalent aftertaste. It's a catchy, easily inhalable number, offered without any form of extravagance. No doubt, I am speaking about a decent song, but it made clear that Entombed were standing at the crossroads. Either way, the real downer here is "Hellraiser", lame, mid-paced, boring, free from any good idea and overly stretched.

On a more positive note, the unpolished sound reflects Entombed's sordid way of proceeding adequately. Crunchy guitars blare out of the boxes, the lead vocalist sings while seemingly having a grater in his throat and all in all, there's nothing wrong with the mix. However, Hollowman does not fully convince. Okay, the swift "Serpent Speech" delivers a nasty, smooth and flawless death metal infusion without any non-essential ingredients. "Bonehouse" points in the same direction, even though it has a comparatively slow part in its center. These songs show the furious core that the band had before it begun its stylistic odyssey with an unclear ending. Don't get me wrong; with the exception of the aforementioned closer, Entombed avoid serious mistakes, but there are also no special moments during the 22 minutes which make your pulse run faster.

The booklet - four pages - holds the lyrics. So far, so good. However, the entire package, especially the cheap artwork give rise to the impression that the only function of this EP was to announce the following full-length. The fact that Wolverine Blues (which offers a bone-breaking riff) is offered in a more or less half-finished version speaks volumes and it would have been fair to reject any thought about an EP release and give more substance to the upcoming album. Its 35 minutes were quite underwhelming in terms of quantity. Thus, Hollowman is acceptable, no more, no less. Maybe its name says it all, because the EP is somehow hollow.