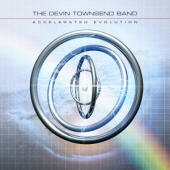 For all its gusto and punch, Strapping Young Lad’s record earlier this year was a bit dull, and certainly lacked substance. It surely had its share of jabs and hooks, but for me, was void of the material that we know Devin is capable of coming up with. If Devin was to leave 2003 with Strapping Young Lad as his only stamp, I for one would deem it a poor Devin year.

Thankfully, 2003 is not a poor a Devin year as he managed to inject some life into another project. Whereas Strapping Young Lad conveyed the appearance of a record that was made under pressure (fans, media, himself), The Devin Townsend Band is an outfit that is negated of the anxiety of Strapping Young Lad.

“Accelerated Evolution” is a record that closely follows on the heels of “Terria” but is shy of the environmental themes. The astral atmospheres and laid back progressive sequences are all here, but opened up more, allowing for the music to really incorporate a dreamy, and more importantly, a relaxed aura. If Strapping Young Lad was the angry bull dog that Devin needed to unleash on the world, then “Accelerated Evolution” is the shy poodle that just happened to eat 2 kilos of hash cookies and is now feeling the results.

However, don’t get me wrong in thinking that the shy poodle is an insipid beast lacking any emotion. For “Accelerated Evolution” is certainly a heavy record, there is no doubting, but it is full of intelligent song-writing and clever structures that make you scratch your chin wondering what lies around the corner, rather than predicting that the ferocious growl will occur precisely here.

Bottom Line: It’s a simple equation, really. The guys that enjoy their music brutal and uncompromising will look towards Strapping Young Lad circa 2003, and the folks that look for doped up poodles in the pet store will check out “Accelerated Evolution.”