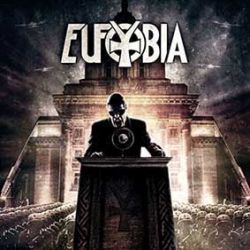 I am a man on the fence, when it comes to death metal.  I am a fan of it to a point, but I am also a harsh critic of the genre as well.   As I see it…when it is done well with innovation and brute force nothing can touch its power.  When it is done with little of the way of change anything or even having a hint of innovation, it falls into a pit of mediocrity that makes it get lost in a sea of sound alike bands that simply are there an nothing else.

Bulgarian based death metal four piece Eufobia play what could be explained as a hodgepodge of styles mashed together into a sonic assault.  There is hardcore punk in the mix followed by brutal thrash, traditional metal and some straight forward death metal with a undertone of groove metal as well. The resulting mosh-pit cacophony ends up being a very distinctive stylings all of their own.

I was pleasantly pummelled with the scarring opening to the album opener ‘Graveyard’ technical heaviness that led into some very traditional thrash.  Throughout the disk, I found myself really digging the music in spots… and then having some rather large and out of place WTF moments. Songs I liked were the opener and the very powerful lyrics of ‘Cyber Pervert’ but the rest seemed to be about the same pacing in about 70% of the album, yet when it does hit the gas- it’s brutal as fuck with just the right amount of melody.

Is this a perfect album…No!  Does it fuckin thrash mostly throughout the thirty minutes its plays…yeppers!  It is a keeper of an album... I will be putting it into my collection, but it will be played only once in a while.  I liked the album, but I don’t love it.  It is a good and strong record but if they focused on doing songs that varies in speed and intricacies – Eufobia would be a contender in the metal world for a spot with the big guns.