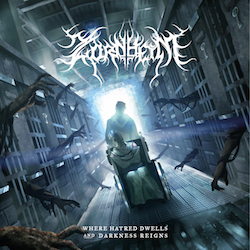 There is definitely a harsh vibe to the music here. It is etched out through riffs that have a jackhammer impact to them. Still, there is a symphonic aspect to this album that adds variety and prevents it from being one-dimensional. The overall collection of sounds is very interesting and unique. There is a black metal aspect to the album, but the somewhat death metal approach to the music means that Emperor is not a fair comparison point for the band. However, there isn’t enough of a focus on death metal to draw a comparison to any band from that genre either. Instead we’re left with a shape shifting behemoth of an album that struggles to find its focus, but brings huge chops to the table.

The manner that the album is difficult to pinpoint is actually a strength for Zornheym because it adds to their versatility. There is simply so much going on here that it can’t help but be an interesting sound brought to the forefront. The riffs are certainly punishing in the manner of death metal, but there is this rawness to the band’s approach that likens it black metal. Though they can’t find footing completely within either genre, the melding of the music makes it more compelling regardless. A Silent God offers a highlight to the music with its brutal approach and memorable riffing. This is only one of many strong points to be found on here, however.

Each song offers up something to take notice and focus upon. The band intersperses short interludes within the tracks to add to the variety to be found on the album. However, this doesn’t quite have the entire impact that the best bands from either the death metal or black metal genre have. Still, Where Hatred Dwells and Darkness Reigns is a mostly splendid work.