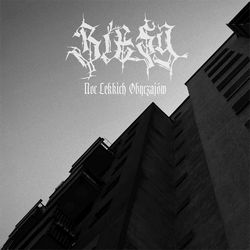 Biesy is a Krakow Poland trio created (loosely) on the canvas of the anti-nihilistic novel by Dostoevsky, woven with dark visions of PR (guitar, bass, music & lyrics). Line up for the recording session of "Night of Light Customs" was completed by MP-drums (Outre) and Stawrogin-vocals (Odraza, Massemord). The album consists of 6 pieces of death metal, heavily tarred with black metal, lasting just over 42 minutes. Recordings have been made at Impressive-Art Studio (https://www.facebook.com/ImpressiveArt/), and the final effect simply kills! All of the instruments sound terrific. The material was published by the Silesian Third Eye Temple.

The album is building up from silence and starts off with slow, slightly sleepy sounds - to suddenly strike with Stavrogin's rough throat power where the bass adds heaviness. Short, but condensed bursts wake me up from the lethargy in which I let Biesy put me into. ‘W Krew’ hits you in the mouth without warning, it is definitely the fastest piece, although not without slower parts, and what an atmosphere we have here… and behold the lyrics! ‘Powroty’ is a song that, in my opinion, gave the new, dark strength to the word "whore". In the sounds of this piece we feel night, filth and stench, which (what an abomination) attracts instead of repulse. Now the slowest – 'Czerń Nas Prosi’, the heaviest, overwhelming even, and, yet again, with the bass. It's also the shortest track, but ending with what? A solid pounding of course! The next one is – ‘Rzucony w Przestrzeń’. I once thought that a good piece of death metal should not last more than 4-5 minutes and here we have such profanity - more than 11 minutes. There is no sanctity in Biesy! Hypnotic, slowed down rhythms are cut by fast pulsating sections here, and the interlude in the middle of the song adds demonic character. This is nihilism in its purest form. The album ends with the title cut ‘Noc Lekkich Obyczajów’ and it’s just another cross section piece, with dynamite, slowdowns and melody. Fucking hell! How did I allow Biesy to suck me in like that? This year, only Azarath stabbed my senses like that, but these are two completely different stories. They were like hellish fire where this is sulfur, horns and hooves, but not like the ones you would expect.

The album was released in a very ascetic style. Black and whites are there to govern the color palate where the “projects” serve as the background. The music is its richness, and texts are like a good spice. Although I know that there will surely be "sour prophets" proclaiming projects like this one to be nonsense, but they can kiss my ass. It is worth combing through tons of promo and merch materials to find album such as this one. Let's put headphones on and let's get out in the city at night. When Noc Lekkich Obyczajów sounds will get through your ears, bouncing alternately from the forehead and the occipital, drilling into your brain, you’ll feel the power of their music. It's not time to ponder, it's time to hunt! Let the blood spill through the reeking streets of your city. Check it out and die!