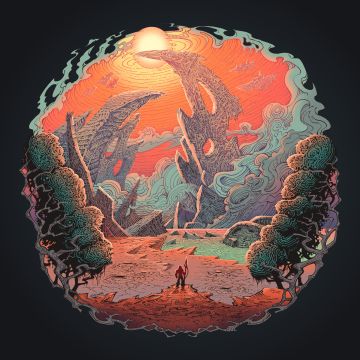 Dvne play stoner doom that has a nice middle-eastern influence to it. The music moves at a nice pace and brings about a head-banging aura. It’s sort of similar to the type of thing the band Elder performs. The riffs are huge and all encompassing and cause a huge vibration. The overall atmosphere of the band is precisely the type that the doom genre needs and fills in the gaps perfectly. It could even be the type of doom that is considered epic in nature.

It all gets off to an excellent start with The Crimson Path. The music continues on an excellent trajectory, however. There is enough of a stoner influence to the music, but it is generally doom at heart. The sort of fuzzy stoner element is present, but also the dreary doom element. This style has been done before, but it is done to near perfection here and worthy of getting compliments. The riffs are very psychedelic and nicely fill in the void for this type of a release. Vocals alternate between different styles and fit the music nicely. The instruments are poignant and have their effect. The guitars are fuzzy as has already been mentioned, but hold up nicely in the mix of the band. The production is crisp and clear and allows the instruments to take center stage in the music. If there’s a flaw to the music, it’s that it’s already been done nicely by the likes of Elder, so the originality isn’t the highest present.

Still, the band gets over this originality hurdle by being immensely enjoyable and having a huge impact. Those looking for a mixture of stoner and doom will find this to their liking and will want to pick Asheran up immediately, as will those who like the band Elder.