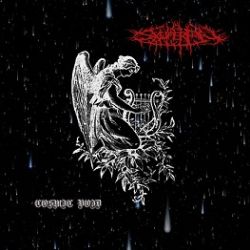 Sxuperion is dare I say, the ideal musical mediator linking the primitive and sophisticated nature of prehistoric civilization, with the unsolved phenomena of the outer hemisphere, leading to the existence of galactic beings far advanced in technology and spirituality. A specific kind of black/death metal has been born, one that opens the portal leading to new discoveries, things that an ever-questioning consciousness wishes to gain understanding of but can only go so far due to limitations imposed by indoctrinations injected early-on in humanities’ existence; inciting fear as a means to suppress knowledge is a tried and true formula that persists to this day. Thus, the will to make some sort of contact with forces now considered foreign to earth's dimension has and will continue to be up for debate amongst all attained levels of academia. According to what I have read based on this solo project, Sxuperion by Lord Sxuperion (Matthew), manifest themes based on science fiction. However; a rather intense spiritual state is called into action on Cosmic Void. Though I would like to have a glimpse into the lyrical content as to gain a better understanding of what is given rise to, I find pleasure in the lack thereof to access freely.

I think it was Valdur’s Goat of Iniquity (in which Matthew contributed vocals and drums) that led me to discover Sxuperion, a finding that would match and, in some cases, exceed the immensity of any given atmosphere created by any band within this sub-genre of metal. The engineering behind Cosmic Void is ingenious, it paints a monolithic scenery of governing celestial bodies, an existence that has the capabilities of creating something from nothing. The idea that mankind was indeed a slave race spawned only to labor for the Annunaki, an alien race of immeasurable intellect. Cosmic Void achieves this space of sorts, a landing ground or a territory that can be used as a guide or palette to widen the spectrum of cosmic projection. You can feel a certain weight bearing down as the music on Cosmic Void swells its posture, in so mounting a pressure generated by the guitars that are played in a trance inducing fashion. “Ardent Hymns Accumulating” has that which I speak of, by using a constant blast beat technique, one that is drenched in and espouses tremolo picking and cataclysmic death metal growls, it erects an air that attests the imagery used. Under this violent atmosphere sits an electronic sound that lingers feverishly, it emits an industrial awareness raising the impression of material in the process of being manufactured and/or excavated.

Short samples are enacted provoking a state of introspect that supports the boasty instrumentation which conjures a state of intellectual, spiritual and organic metamorphosis. I believe most of this music is inspired by Sumerian text, that described humans as being slaves (as mentioned earlier) designed to mine gold for the real Gods; after which would be dispersed of but did not turn out to be so. Enki and some of the Gods and Goddesses saw a future for the species therefore the humans were gifted some knowledge, Enki even encouraged Gods in support of his philosophy and ideology to breed with the females, that which would later be known as the Nephilim. However, Enlil wanted to destroy the humans after the period of mining, hence creating a war between himself and Enki. The music emanates a sort of uneasiness or tension, like the brewing of an animus between and among deities that once supported each other. Due to the rise in contrasting stances, this harmony no longer exists and is animated by the instrumentation on Cosmic Void, which enforces convincing emotional content. This is achieved seamlessly through the use of tremolo picking, droning power chords, oubliette overcast death metal vocals that is merged with extravagant melodies to express a scenery of bedlam during intergalactical combat.

“Irreligious Cosmic Void” is (to me) a very symbolic song; it's the track that pivotalizes the meaning to the artwork on Cosmic Void. I can never resist repeating that song at least twice once playing the record. This image latches on perfectly to the music, possessing a sense of motion taking place within the bowels of some kind of machinery, in-so provoking a dreaded dampness of retribution through violence. That mechanical motion may be attributed to the semi-industrial resonance that is heavily denoted on here. Being galvanized by the greatness of the Anunnaki, that would later be foolishly disrespected by mankind in his pitiful institutionalizing and pedestalizing of a fucking myth, we see just how chokingly dangerous out- of-touch mankind is with the true creators, hence the will of many to attain the truth and eventually evolution.

An arousal of spiritual enhancement and growth spring from Cosmic Void, its way of combining gargantuan vocals with energetic instrumentation and at times a mournful guitar tuning, embodies the strain of clawing towards higher levels of metaphysical development. The God illustrated playing the harp in a condition of melancholy expresses loss, betrayal and anger; three terms in which many recognize in connection with the story of Lucifer and his descent from the heavens. “Prime Calignosity (Disharmony in the Empyrean Kingdom)” continues where the self-titled track ended, therefore creating a scenery of vengeance immediately after witnessing the destruction of a creation both loved and trivialized.

All aspects of Cosmic Void work in excellent synchronicity, the fulfilling drumming (not triggered), the riffing, Gregorian chants and demonic vocals all play a steep and demanding role in reaping feelings of both spiritual elevation and gravity. "Crepuscule Devout Whore" ensures those layers supplanted are transmitted both carefully and urgently as you approach the final sessions of the music. You really can’t ask for much more from a 35-minute oeuvre. For a record that is so short it possesses the qualities of a perennial offering.

Matthew’s work on Cosmic Void is nothing short of immaculate; and being an individual that dwells in the eastern sierra mountain range, he manages to convey an overwhelming cloud of seclusion throughout the record. Also, with the inclusion of samples dispersed throughout Cosmic Void, it feels as though you are at war with your consciousness ever so often. For an album that is only 35 minutes in length, it offers so much that one could not bear the weight of deciphering each detail even if eternity had been granted for him/her to do so. It’s such a colossal and cryptic record, that every ethereal thought is unlocked and called upon to aid in the connecting of the dots. This bond of science and spirituality enforced on Cosmic Void stimulates the mind, it challenges the listener to think and ask questions regarding the relationship of God and man. Cosmic Void is but a modicum of an effigy that is far from ever being apodictic. Sxuperion has created a meaningful body of work that dabbles amidst the ongoing mysteries of time.