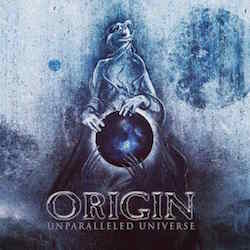 So, it's been three years since the underwhelming Omnipresent, and I think it's pretty safe to say that the metal community was ready and itching for a new Origin album. There are very few or come to think of it, no other band quite like Origin so when a new album drops, it's usually something pretty special.

This is because the musicians in Origin are extraordinary. They have always been extraordinary, and thankfully this release sees the exact same line up from the past two albums, Omnipresent and Entity. Paul Ryan is one of the best in the genre, a truly unique and mesmerizing guitar player. You also have John Longstreth behind the kit, and I don't think I even need to talk about John. We all know who he is and what he's capable of. Mike Flores completes the holy trinity of badassery known as Origin, being one of the best bass players not only in metal, but in the world in my humble opinion. The dude is just flat out fucking crazy. Any guitar player will know how painful it is to play Origin songs. Yeah, now try playing that shit on BASS. The guy is immense, and Origin just wouldn't be the same without him.

Anyway, onto the album. As stated previously, Omnipresent was kind of a letdown. It was Origin's 6th album, and who knows, maybe they were tired or just not feeling it during the song writing process. It happens. But with Unparalleled Universe, they're back in full force. The band sounds full of energy and determined. Most importantly, the song writing is back to its previous glory days, the days of Antithesis and Echoes of Decimation.

"A Coming Into Existence" wastes no time at all. With an assault of gravity blasts and sweep picking - yeah, this is Origin. No doubt about that. The sound on the album, something I'm paying more and more attention to as time goes by for some reason - is alright. It fits the style that the band play, however, it could be better. I've run it through various setups and it sounds okay. That's the problem though, it just sounds okay. It's mixed well, and you can hear everything clearly. Guitars and drums have been granted an equal level in terms of volume, with the bass slightly more in the background most of the time. It's still audible though. You wouldn't have a bass player like Mike Flores in your band only to turn him down in the mix. Though I can't say I'm exactly a fan of this sound. For me, their last "really good" sounding album was Echoes of Decimation, which still had clarity and fluidity, but also that punch we don't seem to have anymore.

Despite some excellent riffs and superb drumming - not to mention a jaw dropping bass performance - I have two problems with this album.

First of all - variation. Listening to an Origin album for the most part feels like you are listening to one big song. There aren't enough dynamics, tempo changes, or different sounds throughout, no big events that make you go "Holy shit!", and not much that will make you rewind because you just can't believe what you just heard. It's pretty straight forward, with the exception of "Unequivocal", which is an absolute breath of fresh air. With this track, while Origin doesn't really explore anything new or dive into new territories, it is still quite different from what they usually hammer out. The track, which is close to ten minutes long, features a stunning section in the middle which then develops into something truly magical. This for me, is what Origin is all about. This is perhaps one of the best songs they have ever written.

Second - the vocals. Hate to say it, but Jason Keyser is not good enough for this band. If there were more variations in vocal sounds and styles, man, what a difference it would make. Imagine if they had someone as versatile as Julien from Benighted on these tunes. They would be unstoppable. The vocals are just there because they have to be. They are just your standard, subpar death metal vocals. We've heard it all before many times yes, but Jason simply isn't that good. Not good enough. Not on Origin's level. I mean no disrespect to the guy as I'm sure he's a good guy and all that, but it just seems like a wasted opportunity to have these vocals on an Origin album.

To conclude, this is a return to form, no doubt about it. The songs are quite enjoyable, and the album has a nice energy you can feel throughout. If you're an Origin fan you won't miss this, but even if you're not, give it a spin. There is some very high-quality metal to be found on here.

Oh, I'm taking off five points because of the last song, "Revolution", which is just fucking terrible.