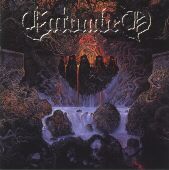 When I look back on my almost 40 years as a consumer of pretty extreme music - it all began with extremely furious tracks like "I Was Made For Lovin You" or "Wheel in the Sky" -, I must confess that I was not immune against the zeitgeist, but I was a victim of circumstances as well. The horrible times began at the latest with hits below the belt such as "Force of Habit" or "When the Storm Comes Down". The music that had chosen me to be its loyal supporter, usually known as thrash metal, had imploded silently. Like an orphan, I was looking for a new musical home and so I discovered Swedish death metal. My constantly eager metal buddy bought the classics "Where No Life Dwells" and "Like an Everflowing Stream", I took care for the equally important "Into the Grave" and "Left Hand Path". All these albums blew me away, but especially the debut of Entombed had a big impact. Therefore, it was clear what had to be done when the advertisement announced the release of Clandestine. The integration of this work into my collection opened the next chapter of my short existence as a death metal follower.

Clandestine did not disappoint me, although it did not hold über-hits like the title track of the debut. Nevertheless, the second output also offered some deadly weapons. The electrifying first guitar tones of "Chaos Breed" opened the gates to a new classic, full of low-tuned chords, weird melody lines, frenetic rhythms and an almost unforgettable chorus which crowned this wild ride through the still fresh death metal galaxy. Entombed did not lack good ideas when it came to memorable sequences. I never forgot the final line of the closer "and through the collonades I walk"; a sentence that seemed to reflect the essence of an entire life. Nicke Andersson's vociferous vocals were actually nothing special, but he avoided the grunts-only-approach. Instead, he provided some animalistic screams and mirrored the raw power of the non-conform style very well. By the way, "Through the Collonades" also belonged to the very remarkable tunes, because it combines a relatively soft beginning with a gloomy intermezzo and a fiery ending. All parts flow harmonically into each other as long as it is not forbidden to speak of harmonies in the context of death metal. On the other hand, there are rather stoically marching songs like "Crawl" that do not surprise with a big number of breaks, no problem at all, because especially this piece impresses with a quite intensive atmosphere, not only during the ghostly outro.

The album does not score with a brilliant production, but the coarse sound underlines the basic atmosphere of the material. Additionally, it lends the nearly 43 minutes a somewhat monolithic appearance. Despite the slightly increased variety, Clandestine spreads the vibes of the sub-genre in every second and it was considered as a worthy successor of the groundbreaking first full-length. The German Rock Hard Magazine gave 9.5/10 and I do not remember any overly critical statements concerning Clandestine which scored with the excellent artwork as well. Nevertheless, I don't have euphoric feelings when it comes to the evaluation of the musical content. Times have changed since 1991 and in my humble opinion, death metal has remained the more or less ugly stepbrother of thrash or black metal, although there exist some fantastic albums of that style. Songs like "Living Dead" or "Stranger Aeons" are still goods tunes, even 28 years after its publication. I am therefore not too generous when giving this album the rating you see in the headline. But I am not sure whether this work would have reached the same status if it had been released by a previously less known formation. Ingenious moments don't emerge and so I am listening to a strong, but not otherworldly collection of death metal pieces. Genre fans can laugh about my perspective or ignore my rating, inter alia due to the fact that I turned my back on many death metal bands as the churches in Norway began to burn. And today I am back on track in terms of thrash. I understand everybody who blames me for my fickleness, but I beg to differ. For me, it just seems as if the cycle is complete.