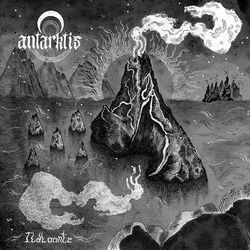 Four chilled, but spurting with musical ideas Swedes created a band that moves in the territories of post-metal and sludge. They chose Antarktis for the name, because there isn’t a place that’s colder, and anything south of Antarctica is pure hell. Do you know In Mourning or October Tide? Antarktis guitarists and founding fathers - Björn Pettersson and Tobias Netzell are playing in the first one, and Tobias scored a 3-year episode in this second band. I must tell you that you can hear particles of In Mourning in Antarktis. The album composed of 6 tracks lasts almost 52 minutes in total. After the release of the last albums of In Mourning and October Tide, Antarktis also fell prey to Agonia Records.

When starting the analysis of Ildlaante, some questions arise. Is music played by this Swedish quartet even metal? In my opinion decisively YES! Will it tickle the likes of metal brothers? Most certainly not all of them. Sludge incorporated in post-metal melody is quite a specific trend to have such causative power. This music is much closer to rock than to the extremely violent rhythms of death and black metal, not to even mention grind. However, it is the sound of guitar, bass and furious roar of Daniel Jansson that makes this melodic rock gain the power and aggressiveness of metal. Musical art is such a camouflaged slut that you have to do her in order to check its power and action. Preferably several times and in different phases of mood and if you have an open mind, Antarktis may just shoot itself in. In the debut of the Swedes, we will not find meat chunks, blood-spattered walls, or Christ's corpse hanging upside down. Crazy moshing, or headbanging will also be difficult during the show. In Ildlaante the compositions are long and stretched, but due to their diversity and melodies, they do not wear you out at all. Melodiousness is not exaggerated, nor it is over sweetened, but slightly dirtied and coarse sound wise, and thus creates a more brutal impression.

The form and atmosphere of the songs makes me hear, at times, (e.g. in Ildlaante) Noc Lekkich Obyczajów of Biesy and in ‘Svalbard’ for example I hear echoes of LG Petrov from ‘Descent Into Inferno’. You may say that it is so retro, that it is so yuck! Some may even say, "it's such a clone of Cult Of Luna", and yet thanks to this Antarctic cold incorporated into music, thanks to this roughness born of black metal, death metal guitars and vocals, the differences are noticeable. You just have to want to and allow these slow sounds settle in our neuron ganglia so that they can build this cold, dark and sad climate. For example, the ending – ‘Cape Meteor Pt.2’ needs nearly 8 minutes to attack, but when it explodes - its rage can hurt pretty badly. In this album I found an atmosphere saturated with coldness and sadness, as well as furious emotions.

Yes, I agree that Antarktis is no new discovery and where is that metal fire? But does hell have to be associated with fire and seething tar? Well, no, and they are the perfect proof of it. The murderous frost and white abyss can be as infernal as fire and black. Although Antarktis does not have much in common with the hell of black metal, the sounds they spit out spin round in such dark areas that there is no reason to look for hope in there. Cold and depressing metal served by the Swedes probably will suffer comparisons to their older compatriots from Cult Of Luna, and for good reason, because, as the proverb says, when you walk among the crows, you must croak like them. Therefore, playing music in the same genre and originating in Sweden, they had to expect that such a patch will be stuck to them almost automatically. But, I dare to say that even when creating music in other metal sub genres it would happen all the same. I think that since there is a lot of room for different bands playing similarly, Antarktis music will defend itself in post-metal, the more so because their compositional ideas and musical possibilities are undoubtedly their strong points. Nothing pressures them and they’re not in the pinch. They tailored out a great material, even though the prototype was made earlier. It seems to me that it is not their last word and I will be holding my fingers crossed for them.