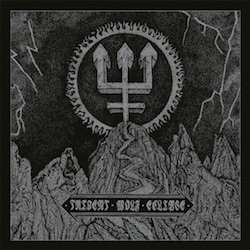 "Nuclear Alchemy", the opener of Trident Wolf Eclipse, is a catharsis. Watain try to wipe away all the lameness, the mediocrity and the megalomania of The Wild Hunt within three minutes. It's an explosive start, fiery, venomous, brutal and completely black. But at the same time, the raging beast on the first position raises the question of whether or not this band can be taken seriously. Their "we are back, and we are black" message contrasts with everything that laid the foundation of their last album. The regular playtime of less than 35 minutes also seems to be an almost ridiculous statement. Why did the band abandon all their principles of The Wild Hunt that brought us this experimental, bombastic, multi-layered (and pretty average) work? I did not like it very much, but I thought that it mirrored the musical conviction of the three-piece.

Let's have a look at the other side of the running order. The digipak holds a ninth track that pushes the album over the 40 minutes mark. It is listed as an "appendix" and to be honest, it would have been an euphemism to call it a normal song. I am listening to an overlong outro that spreads the vibes of a soundtrack for a dark funeral procession. Not bad, but anything else than essential. Listen to Marduk's "Funeral Dawn" and experience a high-class requiem.

The mention of Marduk reminds me of the fact that Watain belong to the spearhead of Swedish black metal. Or, let's say these bands build - together with Dark Funeral - the trident of the black Swedish scene. But "Frontschwein" and "Where Shadows Forever Reign", the last albums of Watain's peers, had more punch and more credibility than the here reviewed output and this is its major defect. The music itself does not disappoint, even though I do not identify a new "Total Funeral" or something like that. The album offers a homogeneous, coherent and adequate portion of comparatively melodic black metal. It lies in proximity to the art of another Swedish flagship, Necrophobic, and the classic releases of Dissection could have been an inspiration, but even competent musicians like the guys of Watain do not easily write a new "In the Cold Winds of Nowhere". Of course, "Sacred Damnation" with its typical Swedish sinister melodies sounds dark, a little bit epic, smooth and gloomy, a really good number, but without this unique individuality of the aforementioned classic that separates a real giant from a very strong track.

The Swedes have given themselves an image that promises an endless spectacle and Trident Wolf Eclipse offers atmosphere, depth and violence, but everything stays in the normal range. No spectacle far and wide. The sixth full-length of Watain is, no doubt about it, perfectly produced and the songs avoid major defects. "Teufelsreich" should be more aggressive, but even the weaker tunes reach a robust level. Perhaps I need to adjust my expectations when it comes to the seventh output, because I fear that the review does not express the fact that I actually like Trident Wolf Eclipse. Songs like "A Throne Below" or "Ultra (Pandemoniac)" show that the band's will to destroy still exists and the blast beat parts of "Towards the Sanctuary" also do not lack determination. However, Watain stand once again at the crossroads. Will they pen another relatively conservative black metal album, or will they challenge the scene with a courageous work? Up to now, they are either conventional and good or unconventional and mediocre. To combine the best of both worlds and to create an unconventional and good album should be their ambitious aim for the successor of Trident Wolf Eclipse.