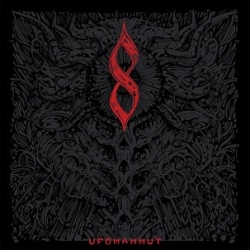 Pissed off mammoth is a dangerous mammoth. Pissed off Ufomammut is 8.

Eternally looped number eight expresses infinity. It is one of those numbers, which has been attributed variety of meanings for hundreds of years. It’s the symbol of eternal cosmic equilibrium, perfection, rebirth and finally - in some cultures - happiness. It was this symbolism that Ufomammut referred to with their eighth album, which brings, as it were, eight new songs. The expressive figure eighth on the cover of the disc is more akin to the alchemical symbol than the actual number, and promises something unique. An album that is worthwhile to get ‘looped in’ and give it a lot of precious time that is constantly limited by the abundance of other music premieres pouring out the vastness of the proverbial sleeve.

This time the band went on to record in a slightly different way, putting their money on the infrequently used nowadays naturalness. During the three days spent in the studio, the Italian trio recorded all material live, playing simultaneously in one room without any overdubs. Vocals and synths were added later. It's all clearly heard on 8. The sound is raw and decidedly less smoothed than it was presented previously.

What's more, 8 is a surprisingly aggressive album, vocally clamorous and downright brutal percussion-wise, which perfectly matches the dirtier sound. Ufomammut has not been playing so hard and straightforward probably since Idolum, and it is a deliberate attempt. A few days before the release of the album, I had the opportunity to exchange a few words with vocalist and bassist Urlo, who told me that this is a specific response to the recent activities of bands which soften musically with each subsequent release. Contrary to this trend, the Italians added more fuel to the fire, without forgetting about all characteristic to their art elements, especially the heaviness and the already mentioned, omnipresent electronics, which adds the essential cosmic aura to this album. In the end, there is no Ufomammut without cosmos.

It is this combination of aggression, dirt, trance and the electronic background that underlies the new material that decides that 8 is an album that is so successful. Having reached maturity this year, Ufomammut does not get short of breath and is still in great form, as is evidenced by the very beginning of the album. Italians didn’t show such vehement opening of the album as the combined "Babel", "Warsheep" and "Zodiac" (a feature of all the tracks on the album) in a long time. After all, the band does not  reveal all the cards immediately, holding the aces in their sleeve until the last minute of inviting to a interstellar  voyage "Psyrcle". Let's just say that furious "Core" could serve as an example. Whoever got the mammoth so pissed off must’ve regretted it very quickly. It's hard to talk about new quality, since the band does not even think about breaking up with long-established style, but it is a style in which the trio has achieved unquestionable championship in which they’re still able to develop creatively.

8 is not aggression only, but also quite a bit of space. Rather stifling and disturbing, but still space, variables and fading, which in turn determine the proper level of material dynamics and effectively protect against boredom. This also favors the varying length of compositions that fluctuate between three and eight minutes. At the end, the eight is a cosmic equilibrium, is not it? The album does not ‘open up’ to you right away, in which production prevents it slightly, but when it finally ‘clicks’ you really want to keep coming back to it and catch all the little touches and simply just ride the sound waves. The looped 8 in the title, when rotated to the side changes into infinity sign, which turns out to be very adequate to the contents of the disc. In the end, however, I have to disrupt this octal harmony, using an assessment that is not number eighth.