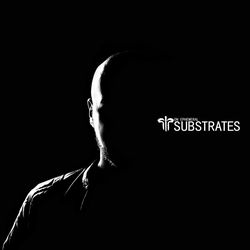 Qip, or rather qip, is a solo project of Maciek Pasiński, who, for older folks like me, is known from the doom/ gothic band Sirrah or the industrial ensemble TheMANcalledTEA. For anyone who has not yet come across the power of his voice and creative invention, I invite you to this 59-minute feast. On Ephemeral Substrates is a debut album, but it is a very mature nine tracks woven with electro-death-doom metal threads and a post-industrial image of our world. It may not be the newest position or some milestone in our metal community, but being utterly possessed by this music I could not resist writing this review regardless of the date of its release. Music, and certainly the music presented on the album, is timeless.

In the promotional materials one can read that On Ephemeral Substrates begins where Sirrah’s Did Tomorrow Come ... ended. I think it is rather the result of inspirations that remained after the work in Sirrah and TheMANcalledTEA, which were developed by Maciek. Whatever there is to be said, without reaching for the very music itself, all the agonizing divagations will simply mean nothing. Although the album consists of nine tracks, listening to it seems to happen on only one breath, from the first second to the last of playtime. There are no gaps; songs pass smoothly from one to another, and the samples add atmosphere and create this agglomerating, post-industrial climate. The album starts quite vigorously, and the pace is rather characteristic for death metal; then again I would not like to mislead you into thinking that On Ephemeral ... is a death metal album in any way. The electronic melodies and the multitude of industrial fillers cause the music created by Maciek to break out of the typical death metal forms; also, beginning with ‘Payback Ritual’, the doom metal past of the author speaks more boldly. However, it doesn’t mean that the songs are dripping with doom lethargy; they gently slow down (or rather need time to speed up).

The slowest ones are ‘Euroregion’ and ‘This Place Is A Tomb’, but even in there the pace is boosted by electronic drums. Generally, the beginning of the album is faster, which evokes the vision of the great, 'bustling-with-life' X-City that is not expecting the impending drama. Maybe it will not be a sudden carnage done by human zombies, or some explosion, but rather a slow death of the city that is caused by the energy escaping from it. Life in this agglomeration is fading; the streets are emptying to show that ‘This Place Is A Tomb’ teems with deteriorating high-rise buildings, abandoned cars and a toxic wind bobbing among them.

Maciej Pasiński disappeared for a long time, but he carried this musical burden within him; once he rid himself of it, he created an industrial-death-doom metal tangle of impressions and emotions that simply crush! The heaviness of his voice integrated into all these samples and electro-metal sound create amazing images of beauty and obscenity, gentleness and brutality, peace and anxiety. I know that qip will not be for everybody, but I encourage everyone to give in to the sounds of this album and let your imagination revel.

Although I am basically a supporter of compositions lasting from about three to four minutes, with pieces such as this one I bow my head, because within three minutes you can create carnage, unleash a war, or a given hell; to build a mood or to give the sound time to paint a picture, you need more time. This task is not easy, and many have already found that out the hard way, since long compositions are only a touch away from boredom and rejection. Maciek managed to create a record that, despite an hour-long run-time, lashes effectively and does not even approach monotony. The one thing that I regret is a low chance of seeing qip on stage. This music and its power could seriously unleash some severe havok in a live setting. Maciek wrote to me that he is already working on the successor of On Ephemeral Substrates, and I am immensely pleased. Do not hurry, Maciej, because you need to give this creature enough time to create the beast. High praise and appreciation goes fully to Krzysiek of Arachnophobia Rec. for the superb release of this work in digipak edition, a six-panel digipak with a 20-page insert is readily available at the Arachnophobia Rec. store for only $13; you will not regret one penny spent.