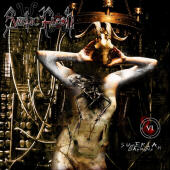 Perhaps I should say that I was struck by thunder when I got this album from these Greek gods but in any case, you get the point. I saw written in another review that their previous album "Revolution DNA" was more atmospheric with choirs, symphonic sections and so forth compared to some earlier, more aggressive, albums. It was also said that when a band changes musical direction, they don't go back to their other style and that's what Septic Flesh did which was a mistake. I don't really agree in the case of "Sumerian Daemons" since apparently this album shows the best of both worlds as far as I'm concerned. Not knowing their earlier albums, I will definitely get my hands on some like "Revolution DNA" for instance. I might not stop there since Septic Flesh has, to my knowledge, five other recordings to their credit since their creation in March 1990.

The best of both worlds is maybe an understatement because this album is simply outstanding, one of a kind sort of hearing experience. Not only this album clocks in at nearly an hour (56:09) but you'll get more than your money's worth as far as a musical treat is concerned. 13 compositions, all different from one another. Everything is there, awaiting you, to please and overly satisfy your musical appetite. The artwork is amazing back-to-back, surrealistic to go with an even more unreal metal with a very avant-garde viewpoint. "Sumerian Daemons" is not just another metal album but actually a rare gem to be listened over and over to discover all of its facets.

The great elements used by the guys are; powerful and awesome riffs, crazy drumming, cool and hypnotic lead guitar parts, demoniacally good deep death vocals, haunting choirs, operatic female vocals, samplings (industrial), majestic keyboards all this woven into a superb melodic structure; breathtaking and fulfilling opus. Nothing has been left aside or overlooked in turning this thrilling musical adventure into a masterpiece.