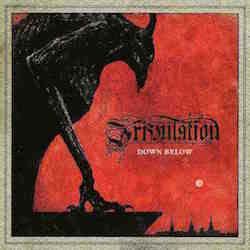 If you were not a fan of Tribulation's 2015 goth metal epic Children of the Night, do not continue reading this review since the days of this group being a straight-forward death metal band are long gone at this point in time. Although the death metal influence is still very well presented, it is only just a fraction of what Tribulation has to offer.  The Swedish quartet continues in similar fashion on their latest release Down Below and kicks it up a notch with even more elements of horror, prog, 80s new wave and  folk metal combined with romantic gothic overtones. It's a style that works very well and overall; Down Below is an extremely pleasurable and satisfying listen from start to finish.

The album opener entitled ”The Lament" begins as a somber, gothic melody that slowly builds into a more death metal enhanced atmosphere with harsh, yet clear vocals. It sounds eerily similar to earlier Moonspell material or even Sentenced on their Love & Death death metal / gothic opus, blended with 80s goth/new wave rock. It's a real eye-opener and is only just the start of what is to be expected.  In the center of it all is the moody interlude "Purgatorio," which is an absolute haunting piece that breaks up the flow of things a bit. The last four tracks on Down Below, specifically the closer "Here Be Dragons," are on the slightly heavier side of things. Bigger riffs and larger-than-life melodies set the stage, and when the album is over it will leave the audience wanting more!

Much like its most recent predecessor, Down Below is heavily compiled with powerful stand-alone songs. As a whole album, however, the experience is all that much more enjoyable; it's formatted in a flawless manner and is the perfect length, an effortless creation despite all of its complexities. Call Tribulation what you will: goth metal, death metal, horror metal; the truth of the matter is, they don't fit under any specific sub genre of metal, and that is just a part of what makes them so special. Here's to hoping we get more stellar releases from these guys for the next few decades.

Tribulation has found their niche in the realm of metal. Down Below is now available worldwide from Century Media!