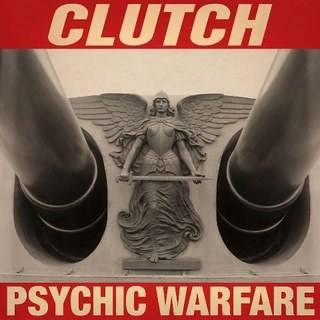 Psychic Warfare brings more of the groovy Clutch vibe to the forefront. It has a rollicking aspect that makes it a delight to listen to. There is a very stripped down rock flavour that goes along with these songs even though they could be considered heavy metal. The song X-Ray Visions gets the album off to a rocking start and the momentum is kept up through a majority of these tracks. There is a feel good approach to the songs that is infectious.

The numbers groove along to at a nice pace and constantly set the tone for the album as a whole. It is a very fun album to listen to and it seems like the band had an enjoyable time creating it. The problem with the album is that if you’ve heard Earth Rocker like me, it is nothing new and doesn’t have the same impact as the first time you’ve listened to the band. The lack of originality is an issue, but only detracts slightly from these tracks. They are still huge, larger than life productions that make the listener gyrate along at an appropriate pace. The songs don’t fall into any genre in particular, but take on an infectious hard rock vibe. They have the necessary amount of feeling to make the listener become entranced in the songs.

Still, it feels the band could have tried to be more progressive and interesting with the tracks. They have a narrow path of rock bliss and don’t try to push the envelope. The amount of enjoyment you’ll have with the album will overshadow this fact and make it a pure joy to listen to, however. The guitar riffs will stick in your head for a while and are largely the reason that album is so enjoyable. As such, Psychic Warfare gets a reasonably big recommendation.