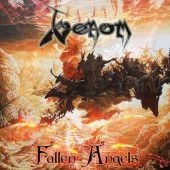 As a man that goes back with Venom 30-years next summer I admit to a tremendous amount of trepidation when it comes to any post-Resurrection releases that, in my eyes, have stultified the band’s unhallowed name. Already into the first track “Hail Satanas” and hearing the ho-hum vision, I wasn’t exactly impressed, but I’m going through twice as always.

I honestly went into this thinking it was going to be more assembled refuse from Cronos and whoever else he has in the shell that is Venom these days, but I’d be lying if I said this album was bad. In fact, it’s really not too bad at all. That said it’s not the dark and horrifying Venom we’re used to, so dispel the notions of a new era’s In Nomine Satanas or In League with Satan right away; the opening track in “Hail Satanas” is widely misleading in that the absolute danger associated with Venom’s image is long washed away by age, a changed musical tide, and a lack of Jeff Dunn and Tony Bray. On that note, Rage and Dante provide a solid backbone to Fallen Angels with some very potent guitar work and competent drumming that often makes one miss Abaddon less and less when it becomes apparent he was the weakest link in the chain all of these years. However, no effective replacement for Jeff Dunn has ever been found for that original ‘dirty’ sound that is both necessity and longing element.

“Damnation of Souls” is one of the tracks that call ever slightly upon the old-school Venom feel, providing a designated journey backwards for a brief few minutes as Cronos and company power through the track with not so much of a hint at reticence. This album is not a distant past glories re-validation for Venom by any stretch, but for its main function and purpose it’s really more than just okay and will more than likely find a soft spot in the black hearts of many a Venom fan, young or old. Other songs like “Beggarman”, “Lest We Forget” and “Sin” are fluid pieces of a larger puzzle that have more memorable and interesting riffs than pedestrian rehashes. Completing the musical picture are some slower, unexpected passages here and there that are not only perfectly-placed but timed accordingly to not wear out a welcome or simply take up empty space. As a whole, the original Venom sound is, at the very least, altered and more modernized to pretty much blend in with the modern thrash bands of today. The crisp, think production doesn’t necessarily deny a lineage as much as it showcases a different Venom that, for this record, manages to encapsulate a resonating and palpable sound.

I’ve always said that Venom lost that familiar edge once they learned to effectively play their instruments. At worst it’s an insult of high order; at best it’s a testament to the fact that even a minimalistic band with borderline talent can destroy and conquer the masses with honest, integral music that influenced a virtual planet of musicians from 1980 onward. The band has certainly capitulated on its instrumental prowess of late, and this album has some really fine moments of old school heavy metal, even if the NWOBHM influence has long been washed away. Cronos sounds more lyrically-inspired than on Hell or Metal Black and while the original danger associated with Venom might be muffled the anger and volatility are still ever present.

Overall this is one of the better post-original lineup releases since Prime Evil. I’m once more glad to be proven wrong, especially concerning a band that has, quite literally, molded and shaped my life in large ways…and damn them to Hell for that!