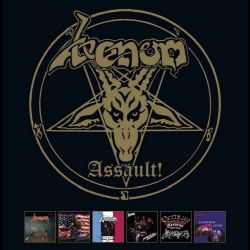 For the better part of 30-years the coveted Assault series by Venom has been some of the unholiest of grail records to try and complete. I know it personally took me 20-years to assemble all seven of the original records, a task that took me to the furthest reaches of the planet and saw me disseminate ungodly amounts of money to add them to my collection. Amazingly enough, I've come to find that a few of these releases were, indeed, bootleg editions never authorized by the Newcastle trio, but to a then-14-year old Legion this mattered very little.

These mini-LP's were all released over time between 1985 and 1988, and now all of these years later Dissonance Productions out of the U.K. has seen fit to reissue all of them in a nifty little box set for an equally nifty little price. The set contains all seven of the unholy collections: American Assault, Canadian Assault, French Assault, Japanese Assault, German Assault and Scandinavian Assault, most seeing CD release for the first time (save for Japanese Assault, which was released on the VAP label out of Japan on both CD and vinyl back in the late 80's).

For the absolute Venom enthusiast, of which there are countless numbers, this is a necessary hodge-podge of studio and live tracks, with the occasional interview thrown in for measure. While I had a  feeling that the original sources for this set would be vinyl (and I was right) the charm and value of the set isn't diminished one iota. The box contains seven nice replica cardboard sleeves completely reminiscent of the old album covers; it really does appear that some care was put into the assemblage of the set, albeit devoid of a booklet or any additional info about the individual releases. In this case the content can, quite emphatically, stand all on its own. Upon their original releases, these were EP's that had both live tracks (some taken from the Alive in '85 or Live at Hammersmith videos respectively) and some rare singles and b-sides. If you are the aforementioned lifelong Venom Legion, these tracks and collections will be no surprise to you, but for newer and older arm's-length fans alike this set provides a wondrous trip back to a time when scouring the local record stores for these records was an all-consuming affair. My personal copy of Canadian Assault carries with it a tale of two best friends beating the hell out of each other in the record store over this evil slab of wax way back in 1985. This band had strange effects of some of us...yet I offer no apologies. Venom fans are notoriously sentimental when it comes to their personal collections, and these Assault records managed to elude some of us for years. I eventually found my Japanese Assault vinyl through the age-old “guy that knows a guy that knows another guy” and paid a hefty amount for it. The CD I procured some time after that was a little less of a challenge (a classified ad in the back of an old trade mag called Goldmine), but nevertheless it was exciting to add these coveted treasures to my library. Now the masses at hand can add all of these little Assault gems to their own personal arsenals in one fell swoop.

So, all of my personal reflections aside, is the set actually worth the price of admission? As a fan I say yes, it's a nice addition to the collection. Now, as a reviewer with my reputation on the line? I still offer a cautionary yes, the caution being that, again, the source material is from vinyl. For those of us that find a charm in those pops and clicks between tracks, this is nothing short of wanton nostalgia nipping at our elder heels, and it's a welcome look back. That said, there are some audiophiles out there that want nothing to do with a CD sourced from vinyl, and that's all well and good – it would serve you folks to heed this warning before purchasing the set.

All of this aside, yes, we have another collection of “hits” from Venom to go along with the 100 other compilations lying around out there occupying space, but there is a real sense of treasure attached to this one if you're so inclined to accept such wonderful trivialities into your head.