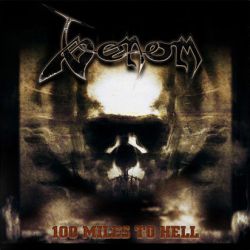 I know that you have invented black metal, death metal and everything else between heaven and hell. That's one of the reasons why I am a Venom fan since I bought At War With Satan back in 1983 or 1984. I went with Venom through thick and thin. Cronos, you and I know that the history of the band has seen some lows and no, I don't speak of the albums with the Demolition Man. But I didn't care, and I was finally rewarded by From the Very Depths. A golden future seemed to be at hand. But now comes this EP... what can I say? It draws the shorter straw in each comparison. Let's put it in relation to...

..."Avé", the album of your former companions Mantas and Abaddon. Their debut under the banner of Venom Inc. presents some lively and some well-hung riffs and many good compositions that have an infectious effect. By contrast, 100 Miles to Hell sounds anything but spectacular. The title track with its solid guitar work doesn't suck, but its mid-tempo and the conventional pattern fail to give it a special glitter. To add insult to injury, lyrical lines like "Lay Down Your Soul to Sell... 100 Miles to Hell" appear as a self-parody.

...From the Very Depths, your last long player. The album had a lot of great tracks, but here we have rather cheap riffs and predictable configurations. Not to mention the fact that 'We the Loud' annoys me, because its ending is much too long, repetitive and useless. Especially the moaning of your bass guitar gives the entire track an insubstantial touch. In view of such a pretty mediocre number, it is a cold comfort that the earthy production of 100 Miles to Hell is more or less on a par with that of your formidable full-length from 2015.

...the fantastic Venom EPs from the early eighties. Songs like 'Lady Lust', 'Die Hard', 'Seven Gates of Hell' or 'Manitou' were true monsters, classics that have stood the test of time. But a track like 'Beaten to a Pulp' has - in spite of its acceptable instrumental part - absolutely nothing that could create a comparable reputation. Its unimaginative chorus illustrates the lack of outstanding ideas most significantly. Speaking of unimaginativeness, please compare the covers of 100 Miles to Hell and, for example, Manitou. The visual difference in terms of originality could not be bigger - and the same applies for the musical content.

Cronos, my old hero, you, your seemingly undernourished guitarist and the long-haired animal behind the drums will have my solidarity eternally, because the name Venom has become a monument. (And please forgive me that I support Venom Inc. as well.) You lead one of the bands that accompany me since more than three decades. But it is a critical solidarity and as much as I regret it: this EP does not whet the appetite for a new full-length. With a great deal of good will, one can say that the three tracks keep the head above water. But that's all. I admit that Venom have returned from the dead many times. Outputs like Prime Evil, Cast in Stone or From the Very Depths come to my mind. Nevertheless, what goes around comes around. Therefore, Cronos, consult Satan, invent the next music style, search for demo recordings from the early eighties with some great, never released songs or do whatever you want. But don't record "just another album" when entering the studio next time - I am curious whether you are able to regain your former strength. I hope so.

As a Venom fan for the last 35-years, it pains me to think that the original trio that emerged from the hellish confines of Newcastle, England now sits woefully divided. As is the seeming norm these days, there are, indeed, two vehicles claiming the Venom moniker, one with Cronos and some hired guns and the other Venom Inc with the original Prime Evil lineup of Tony Dolan, Mantas and Abandon (the latter being far more interesting and musically viable).  So, here I sit, as a longtime, long-suffering fanboy, engaging the newest EP from the Cronos camp called 100 Miles to Hell, which is about 101 miles too long.

While Venom Inc has offered up a full-length more than worthy of the namesake,  Cronos has been pumping out subpar, sterile mediocrity for the last decade-plus. While the Venom / Motorhead comparisons have always been more than a little justified in terms of raw energy and attention to content over style, Venom seems to be stuck in a rut by going through robotic, predictable motions. They seem bent on appeasing only the crazed fanboys and nostalgia-wrapped “legions” that would buy a CD filled with Cronos farting into an old tin coffee can (which, at this point, would be a vast detour from this lackadaisical norm). Some bands need to know when to stop, but when the gravy train is attracting the same radicalized minions, what else does one do to make a living?

The music here is...okay, I guess. Nothing special, nothing exciting, but that's the least of the worries herein. The lyrics to these songs are not interesting in the least, giving way to pedestrian middle-school assemblage by way of the title tracks Dylanesque offering of “Follow the ancient track--/ let the devil wear black--”. Folks, this is what is musically viewed as riding something into the proverbial ground. This is a man who is criminally out of ideas, has no intention of even trying anymore at this point and is more than comfortable just phoning in a sorry ass slab of music like this and slapping the Venom logo on it, a logo that used to mean something. It's apparent that Cronos is trying hard to recapitulate on past tracks, i.e., “We the Loud,” a sad sequel to “Too Loud for the Crowd,” the latter being a crowd-pleasing track that got the blood flowing back in 1985. The title track for this EP is flat, lifeless and a literal “hit the bathroom” song in every facet. Even as the EP closes with “Beaten to a Pulp,” my only thought is how Cronos used words like “pathetic,” “dying,” “corrupt,” and “reeks of desperation” and I can't help but wonder if his subconscious is somehow trying to relay a message to him...a message he won't ever hear.

Is it the worst thing I've ever heard under the Venom name? I'd say it's no worse than Metal Black, From the Very Depths or Fallen Angels, but it's just boring and beating a dead horse in the middle of a muddy dirt road, and at this point either pump up the formula or just stop the madness. Becoming AC/DC and putting out the same formulaic album every couple of years when the bills are due worked for AC/DC, but for Venom it'll be a sardonic addition to their already weakened legacy. This is very typical of certain bands to figure that as long as the sales aren't horrible for their allotted position in the music world, then they can just churn out the same recycled lethargy and know the restless slaves will lap up the remnants like hungry lap dogs without question or complaint.

For my dollar, seek out the Venom Inc chasm and get a a taste of what it means to be a band with a defined legacy that can and does implement modern nuances and imaginative resources to keep the old formula fresh and exciting. Stop worrying about KVLT status for liking the “imposters” or “scabs” and let it sink in that one of the guys in Cronos' camp came from a Bon Jovi tribute band and Inc's Tony Dolan is from the mighty Atomkraft...I'll let that sink in for you.

There comes a time when you have to give up the ghost and go gently into that good night. It's a shame that more bands don't follow this advice.