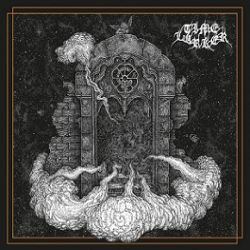 The package that came from Les Acteurs de L'Ombre Productions some time ago is like a treasure chest, no matter what I pull out of it seems to be some kind of a gem in one way or another. Time Lurker is a French one man band/project that I’ve been listening to lately, and his first full length, self titled album is another one of those albums that does not want to leave my player.

For those of you that wonder about Time Lurker doings I can tell you that black metal with lots of atmosphere, some post and some gaze thrown in for a good measure would be a half assed attempt to explain it. Mick, who is the main and the only force behind this name, is a multi-instrumentalist that not only played all the instruments but also recorded and mixed all of it. Mastering was given to Jack Shirley, and vocals were done by Mick himself, as well as by Thibo, Tony, Cedric and Clem.  Not much more info was given out but not much more is needed since music is what we are going to talk about anyway. One man projects or bands in black metal are fairly common, but unfortunately rarely innovative. Time Lurker is not breaking any new grounds with this record but is also quite far from walking the beaten path. The first song couldn’t be a better choice for an opener since it contains all elements that are to be found on this album. With running time of almost 12 minutes, it manages to exhibit everything the Time Lurker is about. Black metal riffs that are violent, ferocious, viciously fast but also wickedly memorable interchange with instrumental passages that sound hauntingly mesmerizing. The instrumental atmospheric parts that satiate songs with aspects of sadness, pain and melancholy are dramatic and insanely epic. Truly fascinating listen with attention steered just to those elements but once vocals are added into equation everything intensifies. Black metal shrieks, possessed screams, maniacal screech and some deeper growl at occasion are mere words when trying to explain insanity that happens here. To think about it, this could be an explanation of why there were so many people involved in recording of vocals. One throat could not handle this madness of the vocal chords! This album is crammed with many great segments but none of it would be happen without hard work of the rhythm section. From the very beginning to the very end, it carries whatever happens on this album with an excessive, consistent, machine gun force. It suits the music well and the more carefully I listened, the more I realized how important it is in this whole scheme. All pieces were put together masterfully and finished with production that’s more on organic side and somewhat blurred, which only helps the album achieving more original, untidy but still selective sound.

Time Lurker was a very satisfying experience of going into imaginative regions. It may take couple of spins to fully appreciate it, but if this is Mick’s first album, there is no telling where he is going to take us next. With the talent that he possesses, with the way he creates his fascinating musical passages and with how the whole story entangles, it is a must to keep an eye on this band. Give it a try but be ready for a long and introspective trip to where several universes gather as one.