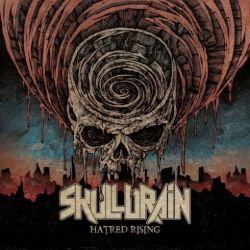 The Skulldrain name (with slight modification) originates in the medical field and gets its name from a procedure that might make you queasy once you find out what it is. I think it is also a pretty cool name for a metal band. Hatred Rising is the first full length for these Swedes, and the list of their influences includes Exodus, Vader, Slayer, Destruction, Lamb of God and The Haunted. As you probably have figured out already, thrash is the name of the game, but I bet that you didn’t know that the Skulldrain guys are not some fresh dudes trying to make some noise but experienced musicians with stints in bands like Demonical and Sectu plus a cooperation with Zodiac Ciphers. Well, with all that out of the way, the time has come to talk about the main dish – Hatred Rising.

Skulldrain churns out hard, fast and dynamic guitar-oriented thrash metal that is not only well composed and arranged but also with the attitude level turned all the way up. The album’s sound is kind of dry (which is quite normal for a thrash metal record), but personally I prefer the guitar sound to have more of a 'juicy drip' to it. However, considering how much is going on in most of the songs, it is probably a good thing. More so, after listening to the album many times, I felt that the way album is produced makes the music not only come forward with tons of energy but also exposes this catchy ferociousness and guitar hooks to stay interesting. Thrash is known to carry lots of speed with it, and there is plenty of it here; Skulldrain also found a way to incorporate some of the familiar slow and heavy riffs, some groove, and a fair amount of melody. All the aforementioned above especially comes out to the front in ‘Antisocial Agenda’ with catchy riffs throughout and a nice solo or ‘Through Death’ with a fist-pumping chorus and good melodic solo for example. That said, there is something different and original happening in every song on the album. There are also two instrumental pieces that break the pace, allowing for a little respite and gathering of thoughts, which is much needed on an album dominated by speed, power and rage. Both are quite outstanding I must say. So far, so good, right? Well, as good as it sounds, there is something that bugged me a little. Even though the riffs on this album are top notch, they’re not future hymns of the genre yet, and there are a lot of awesome riffs or even sections of the songs that could be just that. There are riffs in ‘Hatred Rising’, ‘White Phosphorous Bombing’, ‘Trigger The Crisis’ or in ‘Bad Blood’ that appear for just a moment and are way more infectious than what was pushed to the front. It is a matter of preference of course, but after listening to the album for a while I noticed that I was looking for those riffs almost every time, wishing for those to be exposed and maybe carried on far more. Just a little something I had to get off my chest.

So, what is the bottom line? Skulldrain released a very interesting album that can compete with many out there, but there is still work to be done. As far as debut albums go last year, however, they are definitely somewhere up near the top, and if that’s how they start I see a bright future ahead of Skulldrain. I’ll be waiting for the next one; I wonder what they’ll do.