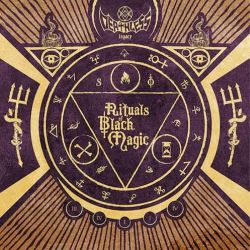 The music here resonates with a strong symphonic frequency.  The music has keys and other elements to add depth to the band.  There is strong music within the vain of early Within Temptation, but contains less focus upon the female vocalist.  Although strong, it is the music of the instruments that takes center stage here.

Guitars are sweeping and symphonic in nature and form the backbone for these songs to shine through.  There are some keys that add a somewhat gothic atmosphere to the band and add character to the tracks.  Finally, the vocalist overlaps the tracks and adds her own charisma to the mix.  Like I said, she’s not the best female vocalist I’ve heard, but she’s good enough in her own right.  It is the symphonic aspect of the band that makes them tick and raises them above the typical music from the metal genre.  There is a dynamic combination of sounds that is very interesting and better than some of the reviews of this album have made it out to be.  Just see the track The Abyss for a viewpoint on the band that is very positive.  This track is diverse and exciting and sets the tone for what’s to follow.  The chrorus’ of the band are exciting and make some of the songs stand out.

There is a very emotive aspect to this band that is welcoming, but they back up the atmosphere with some serious chops.  What is wrong with the album?  Well, it doesn’t do anything overly spectacular and stays somewhat stuck in a rut.  One wishes the band would be a bit more innovative, but they are more than compelling enough despite this.  Still the music gets knocked down a notch because of a lack of freshness to the music. Fans of symphonic metal will still find a lot to like with this release and are encouraged to seek Rituals of Black Magic out.