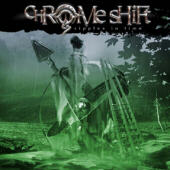 Over the past years of listening to progressive metal and/or rock I have found it to be the most infallible genre in the metal/hard rock/extreme music scene. Perhaps this can be attributed to my listening not being as expansive in the prog world as, say black metal or death metal, but I think the underlying element underpinning most prog metal scenes is that there isn't too many filler acts like the abundance of crap served up on a daily basis from either the black or death scenes.

You really, really have to pay DVS Records some high compliments in their ability to discover some of the highest quality unknown progressive outfits around. First there was Wolverine and Into Eternity (who moved onto Elitist and Century Media respectively), but since the departure of two of their big name bands DVS Records have continued to serve up quality record after quality record. Ashes to Ashes "Cardinal VII" was quite simply one of the best pure heavy metal discs of last year, and remained in the top 5 records of 2002 as voted by you folks (Metalbite readership). Latest to adorn the DVS record list is a relatively unknown band from Denmark called Chrome Shift.

The Pain of Salvation and Dream Theater influences for these five boys from Denmark can be certainly seen in "Ripples in Time," and fans of those aforementioned two acts should really look into grabbing this record. Chrome Shift has put together an exciting record in "Ripples in Time;" here we are presented with a band that is a tight and most importantly cohesive unit. Chrome Shift has only played together as a band since 1999, but it certainly does not come across that way; the understanding of each other's playing strengths and weaknesses, as well the capability to compose a song that showcases each member's artistry is a real testament to their capability as an outfit in the prog scene. Each track is multilayered with enough conflicting and contracting elements, and delivered so easily that "Ripples in Time" becomes an absolute thrill to be a part of. If you were one of the thousands of people that fell in love with Wolverine and "The Window Purpose," then I can 100% guarantee you will find some pretty impressive material on "Ripples in Time."

Bottom Line: I really, really enjoy what DVS Records are doing at the moment. The production, compositions, atmosphere, chemistry, you name it, Chrome Shift have done it better than most could hope for. "Ripples in Time" is the something you may have been waiting for.