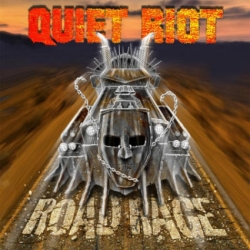 It’s an odd feeling, reviewing a band that at one time in my life I was obsessed with. Yeah, I was almost 14 when Quiet Riot rose in the chart so sue me.  The great Quiet Riot now are a shell of what they were. Mega lineup changes, the death of their famous ex-guitarist while with Ozzy Osbourne and the singer who brought them to international fame and the passage of  time paint the history of the group in many ways.

Drummer Frankie Banali, who was behind the kit through the rise when they hit the charts, now leads the band – while line-up changes have made the band unrecognisable.  Now with a line-up that includes American Idol alum James Durban handing the vocals, they release the newest album Road Rage. The album had been basically done, but their old vocalist Seann Nicols quit and they brought in Durban.  QR then delayed the release so James could not only re-record the songs vocally, but completely rewrite the lyrics as well.  The results were pretty good in the end, but could have been better.

Songs like Can’t Get Enough and Renegades are great songs, while the interesting lyrics on Freak Flag makes this the stand out track on the album for me… but for most on the album suffer from the same tempo and sound syndrome.   The songs simply bleed into one another and makes everything sound the same, and almost sounding like one droning song (or your mother’s nagging) if you’re not paying attention to it. These tracks are listenable but makes no effort to capture the listener.

It is what it is, and for this old QR fan, a letdown.  James tries like hell; his voice is strong and classic… but misses the mark like a drunk man trying to use a Japanese toilet for the first time.  I was unsure of what I was expecting… but I know this was not it.