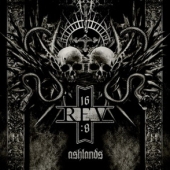 I can still remember the first black metal album I ever heard - it was the amazing Black Metal by the legendary British metallists called Venom.  With their stripped down heaviness and explosive power, not to mention their over the top antics  Venom became my favourite band for many years.  It sort of paved the way for what my musical tastes were to come. Background now set - now onto the black metal of today.

Rev 16:8 is a extreme black metal band hailing from Stockholm Sweden, formed out of three bands who had changed and grown out of certain members (Bloodshed, Black Funeral and Scythe).  Rev 16:8 are simply put melodic yet cruelly savage black metal, dotted with the explosiveness of death metal... sort of like a conglomeration of Dark Funeral and Marduk come through as a explanation.  With comparisons like that, you think Rev 16:8 would be a benchmark of an album – or so you would be led to think. In fact, Rev 16:8 is a band that in the black metal universe seems stuck at average, despite the sonic power and nasty riffing laid down on every last one of the Ashlands tracks.  Rev's music has all the makings of being that one very great black metal album, but I find the album has this feel of repetitiveness and lacks originality which in turn weakens of the music.  I love the heaviness, and the complexities of the music, but I have heard shit like this many times before and it just becomes almost like listening to elevator music as it does not grab you.

Coming across as heavy as it is familiar, Rev 16:8 album lacks the mark of having any shred of originality  that could grab you and make you take notice of them for longer than a few moments.  It is pretty pedestrian in its form, despite trying to be so brutal.  Don't get me wrong here, it does have a few merits that make it not bad to listen to but it is the average nature of the whole album that makes it sputter and fade like a candle in a driving rainstorm. It is a sad state of affairs. These explosive Swedes have all the talent in the world and could be the next Venom or even Emperor yet where their music is at this point on this release I do not think for a moment they have that. The album Ashlands falls so very short and never stands out and orders you to listen.