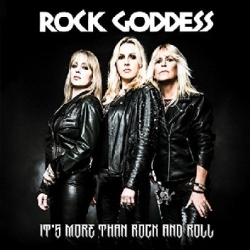 Buy on: Bandcamp
Type: EP
Release Date: May 19th, 2017
Label: Independent
Genre: Heavy, NWOBHM
1 It's More Than Rock And Roll
2 Back Off
3 We're All Metal
MetalBite on YouTube

Along with Girlschool, London's Rock Goddess was the female side of the coveted NWOBHM movement of the early 80's. Managing to put out three solid full-lengths in a scene wholly populated by testosterone-jacked alpha males, the trio held its own with some really classic and resonating tunes. After a nearly-30-year hiatus from the Rock Goddess template, the ladies are back with a new EP, It's More Than Rock and Roll, proving that time away doesn't necessarily kill either the spirit or the talent.

There's a discernible magic to this sound that bands like Diamond Head, Atomkraft, Chateux, Saxon, Angel Witch, Witchfynde and Aragorn created in the late 70's. Every modern metal band owes a small, yet undeniable debt to this sound, and Rock Goddess was instrumental in making sure that the women in the fold were just as noticeable and heavy as their male counterparts. Sisters Jody and Julie Turner are back with Tracey Lamb to offer up three songs that not only fit perfectly in the band's discography but will no doubt prove to naysayers that there's plenty of luster left on some forgotten, valuable artifacts.

This EP is just as blistering as the bands early 1983 efforts, Rock Goddess, Hell Hath No Fury, and the 1987 opus Young and Free, all three stellar examples of that much-heralded British wave that swept over the region like a tsunami. Eventually that music storm made its way across the pond and into the States, influencing more than a few U.S. powerhouse bands over the years. With the current rage being nostalgia and all that it entails, it's nice to see the NWOBHM resurrecting in both older bands reclaiming their spots and newer bands capitulating on that classic sound. While many classic bands are vying for a reclaimed spot in the current wave of this NWOBHM resurgence, very few manage to either recapture or keep up with their former glories. Rock Goddess manages to effortlessly wave a collective hand over the masses and nestle back into their familiar spot with all of the ease of a runaway diesel truck. Jody Turner's voice still commands a formidable presence, echoing hard through the room and passionately espousing her love or rock 'n roll to a more than willing audience.

The tunes themselves are very “old school” sounding, providing for us older folks a sharp glance back in time. Those of us who remember well going into select record stores in the city and hearing this beautiful British sound wafting out over the aisles will appreciate this nod back to the ever-distant past. The opening chords are so reminiscent of that long-lost period that it takes me back to the early 80's so evenly. All three songs herein are really “fist pumping” anthems for heavy metal, and while some of those similarly themed efforts by other bands fall criminally flat in the current climate of overused and outdated nuance, these tracks find the perfect niche still carved in granite. It's really a flawless “metal-for-life” dialogue that can't be denied or dismissed.

Tightly knit and polished to a solid state of familiar antiquity (all the while retaining some modern technological devices), there's no denying that Rock Goddess is still out sitting high among the dead men. I truly hope this is just one short stepping stone back in to the main fray of metal music, and by all of the underground rumblings a new full-length is supposedly in the works. I, for one, really hope this is true because these bad ass ladies have been missed!