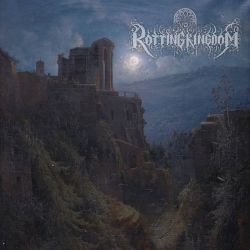 What can be said about this offering by The United States’ death/doom outfit Rotting Kingdom’s 3 song self-titled EP other than enchanting. Not much can go wrong when a death/doom band attempts to play this kind of material in 3 long portions given there is enough substance to facilitate the lengthiness. Rotting Kingdom does more than just provide the listener with enough content to supplement the experience; it achieves immersion through the slightly melancholic opening track to the horror themed moments of “The Castle of Decay” and the ominous presence of “Demons In Stained Glass”. Considering this is only 24 minutes of material; it was important and vital that the members of Rotting Kingdom effectuated musical absorption from the inception.

“Adrift In a Sea of Souls” starts as a doom metal track traditionally would, softly, slowly then builds in speed as you tag along for the journey into dark territories. It constantly plays with rhythm in an act to accomplish a sense of reverie whilst perpetuating and reinforcing the atmosphere. This is achieved through loud twin guitar leads that drift along passages and at times are intersected by each other when playing diverse notes that actively trade compliments back and forth. At times the lead riffs for a particular passage may take the form of 2 installations, the lead riff and the stripped-down version of that riff. An example of this can be heard on the opening track. Like two diverse roads with multiple turns that eventually spearhead the same path; the music on Rotting Kingdom does well to weave slightly varying sections into one comprehensive body of work. As far as experimentation goes, there is a bit of that happening on the “The Castle of Decay” via use of a stoner doom metal modus operandi. It was a decent experience to drift from the contemporary death/doom style to an orthodox format of stoner doom metal momentarily. By doing this Rotting Kingdom exhibited their ability to convincingly and effectively incorporate other elements into context. After exiting the horror-esque overtone one is immediately greeted with a black metal characteristic via tremolo picking that quickly develops into an ominous state of consciousness. The transition from one format to another whilst keeping the death/doom aspects inviolate is essential, as some bands tend to endeavor such routes but end up jeopardizing the consistency of the music. Rotting Kingdom does not falter here.

Rotting Kingdom is quite a profound offering due to its short but multifaceted lyrical styling, which can either be interpreted as fantasy or reality (reality in terms of emotional and introspective value). The clean production of the music makes it easy for anyone new in the genre to listen and appreciate each aspect; whether it be the strong drumming, hulking vocal enunciation and the extravagant riffs and solos.

The conveyance of Rotting Kingdom’s messages and discerning were indeed both candid and submersible. The members of the band channeled their efforts in unification thus providing portentous and memorable quantities of music. Having heard this material has evoked much anticipation for a future full-length release from Rotting Kingdom. They are certainly an upcoming act that enthusiast of the underground death/doom scene should keep an eye on.

Doom and death metal are pretty great on their own, but when combined together and arranged in a special way, they become grand. And Rotting Kingdom has done it. I knew that I was going to like this EP from the first moments and the first notes of it. Godz Ov War never ceases to amaze me with the music they dig out from all corners of the planet, and if any of you are looking for interesting bands that are not regular run of the mill - don’t skip on visiting pages of the two aforementioned. There are only three songs on this EP that lasts around 25 minutes, so it ends too soon - but on the other hand, it is a great piece to tease all metalheads with what is coming in the future.

At some point, some time ago, I thought to myself that death and doom genres became stagnant in a last couple of years. Finding a band that figured out their own spin and fresh approach on how to combine those two was not an easy task. Sameness of riffs, boring vocals and identical sounding albums steered me away from the genre, but then Rotting Kingdom pops on my radar. It has been a few months since the album was released,  but I just got my hands on my own copy of their debut EP and it keeps spinning in my player ever since. I think that Rotting Kingdom created something that will put their stamp on metal and bring a spark to my interest in death/doom metal back. I’m sure of it.

From the first sounds to the last note, this little EP is bringing greatness of classic death doom masters, enhanced with fresh attitude and an atmosphere that’s masterfully layered and amazingly balanced. There are plenty of mournful and desolate melodies, dark and heavy passages, pummeling drumming, unrelenting riffs or powerfully slow and crushing slowdowns finished with awesomely gurgling vocals. Every song has its purpose and brings something different to the forefront, so listening to this extended player just once is simply impossible. I could talk about the songs and instruments and production but with only three songs it would not leave much for you to discover yourselves and that would defeat the purpose of me trying to get all of you to listen to it. If you have any interest in music that is hauntingly melancholic, impossibly heavy and crushingly sad but yet furious and full of anger and rage - then this is what you’ll find here.

The way I see it, this Kentucky quintet managed to combine best elements of early Anathema, some Paradise Lost and My Dying Bride, maybe some Cathedral and Asphyx into a concoction that is so confident and so satisfying, that it makes it hard to stop listening to it and puts a big pleasure grin on this old guys face. This is a brilliant debut from Rotting Kingdom guys, and knowing that full album may be out in 2018 makes me very excited. Great job!