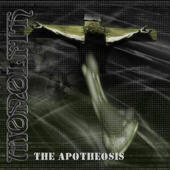 Fortunately for all parties concerned The Monolith Deathcult is an outfit with a just a tad more bite than your average junkyard pit-bull. Once we weave our way past the gross over-usage of terms that you might read if you decided to do a scan for 'brutal' in the thesaurus, we are actually presented with a band that have enough going for them to be something besides another 'copy.'

Musically The Monolith Deathcult scrub up in a pretty ship-shape way. "The Apotheosis" is a fair ol' kick in the right direction as far as interesting death metal goes. Generally most tracks start off in a fairly pedestrian sort of manner (you know the ones that make you think 'ho-hum'), but after 30 seconds or so, the tempo is raised to the next level and things start to become pretty tasty for all discerning death enthusiasts. Over the top of each and every track is a pretty tangy tri-vocal attack from three of the members of the foursome (leaving Sjoerd the monotonous task of smacking up the skins, and nothing else), which keeps things pretty interesting from a vocal perspective. 'The Deserved Reputation of Cruelty' is a terrific example of this.

From a lyrical point of view, The Monolith Deathcult have some interesting tales to divulge. Vlad the Impaler and Attila the Hun being some of really the most interesting topics I think a death metal band could possibly take up. I mean, I actually -want- to follow along with the lyrics for each song on "The Apotheosis."

Overall The Monolith Deathcult have delivered an exciting record in "The Apotheosis." It possibly won't blow you completely away, but it should be a record that gets a decent slab of rotation time.

Bottom Line: Far more than a Nile clone, far more than the standard fare in death metal circles today. Aside from the interesting stories portrayed in the lyrics, The Monolith Deathcult has a good deal of things working for them; natty three-strike vocal delivery; interesting tempo variations and most importantly a fair bit of flair in each aspect of the overall presentation of the whole package.