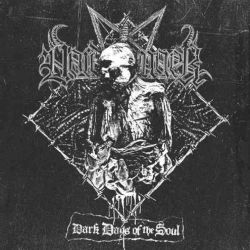 Type: Full-Length
Release Date: March 2nd, 2018
Label: Agonia Records
Genre: Black, Death, Thrash
1 Dark Days Of The Soul
2 Death Wish
3 Naprzód Donikąd!
4 High On Hate
5 Man Of Dark Secrets
6 The Void Is Where The Heart Is
7 War Is Certain, Peace Is Not
8 Hailing The Devil In Me
MetalBite on YouTube

Poland is, we all know it, a hotbed for soul-devastating, belligerent sounds and Voidhanger's third album presents a compact overdose of nastiness, malignancy and disgust. It's recommended to all freaks who like the infamous, crusted and mostly ingenious Driller Killer. And those who do not know Driller Killer (inexcusable mistake!) but love to be ugly. Enough said?

No, definitely not. The eight pieces deserve a more detailed description, because the band does not lack energy and determination. Don't be fooled by the almost poetic title Dark Days of the Soul. Sensitiveness is not among the core competences of the angry three-piece. Quite the opposite, they mix more or less all types of extreme metal - thrash, death, black metal, crustcore - in order to offer a nonconformist cocktail of (non-chaotic) noise. Thunderous guitars, just listen to the beginning of "High on Hate", characterize the compositions during the entire playtime of nearly 34 minutes.

Voidhanger do not take a breather and, even though they do not focus on consistent high-velocity outbursts, they see no reason to shift into a lower gear. The drummer works like a berserk on parole. Needless to mention that the lead vocalist sounds like a barking dog that misses its breakfast.

However, sometimes the musical understanding shimmers through all these violent elements. Exactly this feature is necessary in order to prevent a monotonous noise session. Fans of Terrorizer know the difference between a hellish vortex of brutality ("World Downfall") and an emotionless attack of raucous guitars (broad parts of their later works). I freely admit that the encompassing genius of early Terrorizer remains unrivaled, but Voidhanger have written coherent, substantial and pretty varied tunes that do not lack competitiveness. Although they mostly deliver a thunderstorm of violence, they allow themselves to integrate a few desperate, morbid and hopeless sequences that embody the Dark Days of the Soul in a suitable way. Better still, the album does not suffer from any kind of fillers and it grows with every new spin. Even the stomping closer does not fall by the wayside. Instead, it makes the output complete in a very expressive manner. Its heavyweight riffing serves as final proof that this band does not make lukewarm compromises. So, dive into their world of acoustic terror, if you are one of those dudes who like it ugly. By the way, you will meet me there.