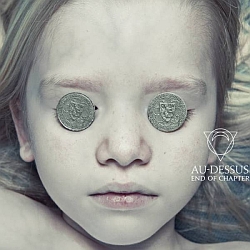 Hooded metalheads from Au-Dessus are moving forward quite quickly in the metal world. Barely two years after releasing their first EP, I hold in my hands their new album called End of Chapter, and it feels more like a great beginning rather than an end. Au-Dessus is determined and focused in what they do, and all of the hard work is paying off.

In existence for only about three years, they already have two strong collectives out in the world and managed to play some shows outside of their homeland of Lithuania. Three out of four members of the band played in a death metal band called Paralytic before starting Au-Dessus, while the fourth one is not a newbie either; the experience can certainly be heard in their music even though they jumped over a couple of genres.

The music of Au-Dessus can be defined as a combination of black metal with lots of ‘post’ elements and some occasional psychedelic sections. Once you read the lyrics it may not be appealing or inviting, but in this musical case only a few words explaining what is going on within this album are simply insufficient. Let me elaborate, if you will: tracks are numbered VI to XII as a continuation from their previous EP, and with a running time of around 45-minutes these guys are taking us on a ride through a variety of emotions and styles. I’ve mentioned black metal at the beginning of this paragraph, and it seems to me that everything is built on or emerges out of it. Fast and aggressive riffing, combined with devilish shrieks and demonic howls, meets truly intriguing atmospheric parts that are enhanced with clean vocals; the music then moves into some sludgy passages and envelop everything in progressive or post-black concepts.

Most of the songs on the album are based on vicious and all-out 'rage-riffing' to start, only to then introduce more experimental structures and expand more unconventional ideas. All compositions are remarkably coherent and straightforward, making them powerful and aggressive. Unfortunately, lyrics are not available to me at the moment, but in the interview I’ve read with the band it’s been said that they are subjective, pessimistic views of the world and touch on the sense of uncertainty, with an evident awareness of the surrounding hypocrisy.

After numerous listens I am confident in saying that Au-Dessus is a master of balancing between slow, progressive, even unsettling segments coupled with their ferocious, crushing counterparts. As challenging as it may sound, they came up with fascinating material that, once it grabs you and sinks its teeth into you, won’t let go. Au-Dessus delivered an album that keeps giving every time I play it. It's a fantastic album with tremendous atmosphere offered with such skill and passion that it should bump those guys up to the front of the charts easily; it is surely not something you want to miss. I am going to watch out for those guys with high hopes and my fingers crossed because there isn’t much that can be done better in this sphere.