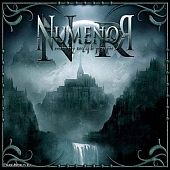 ::   ::
Type: Full-Length
Release Date: August 29th, 2013
Label: Stygian Crypt
Genre: Black, Power, Symphonic
1 Opus Draconis
2 The Eternal Champion
3 The Hour Of The Dragon
4 The Alchemist
5 Chronomancer
6 Servants Of Sorcery
7 While The Gods Laugh
8 The Sailor On The Seas Of Fate
MetalBite on YouTube

Admittedly, I have pretty much thrown in the proverbial towel for any modern black metal. How much more rape can a genre withstand before someone finally cries, "Uncle!?" It seems that everything post-1996 or so has become a running joke, with ridiculous social network memes of Abbath hanging out with kittens and a myriad of other inane photos secured out of complete boredom. If I ever see one of those again (and surely I will) I may just extract my own eyes via a rusty olive fork. I tend to turn blind eyes and deaf ears to most of it these days, just for my own sense of sanity, though every now and then I'm surprised with something new and exciting.

Númenor calls itself "epic black metal," and I will admit to much trepidation going into the Colossal Darkness album I received last week. After hearing two tracks via YouTube, I will admit to being more than a little interested in what I was hearing. Yes, there is a grand, gigantic sound associated with the band's music here, but there is something quite entrancing about this band. This isn't your usual lo-fi, foggy garbage vying for that Burzum sound that should be put in its final resting place to end the misery. The sharp, but not over-polished overall sound lends a credible vibe to it all, majestic overtones and all. There are a dozen different things going on all over this album, and it's a refreshing reprieve from the same old junk regurgitated every two months.

Vocalist and main man Despot Marko Miranović manages to hone his vocal prowess to a fine point, shifting between a commanding, authoritative clean tone to the obligatory, yet well-enunciated rasp that is part and parcel with black metal. The shifting between styles is not in every track, which makes for a pleasant experience in that regard; when an album becomes predictable in any fashion right out of the gate, you may as well cash in the chips and be done with it. Happily, Númenor doesn't venture into that ridiculous territory, and it remains a fresh and enjoyable engagement throughout. I also really enjoy the clean tone vocals, as they really lend an air of expectancy to the picture. It's like imagining a general of an ancient army calling out to his soldiers, sans pomp and rank embellishment. As for the album itself, the opening instrumental track, "Opus Draconis," sets a stage of antiquity that is perfectly arranged and sort of barrels rather seamlessly into "The Eternal Champion," which sort of travels over the snow-blanketed hillside towards unknown wars and fates.The real magic to black metal music of any kind is creating visuals from otherwise empty spaces; if the music can create such memorable and vivid visages, then the music has been nicely presented. In this day, this is a difficult undertaking. Númenor does amazing things without overblowing the storyline or lulling the overall feeling. The only other modern band I've enjoyed that can do this so effectively is Carach Angren, and there are some small, but definitive similarities in the music of both outfits.

What's really cool about Colossal Darkness is how evenly and interesting the music flows through the tracks, connecting the larger piece through all of the viable, chaptered parts. There is a definitive story here that can and should be ingested in one sitting because it flows so perfectly within itself. I especially dig "Chronomancer" with its indelible eerie intro that sounds like every ghost story you have ever imagined through Hammer Horror films. The guitar work all over this record is quite impressive as well, sweeping through like a scale-laden vortex. Dare I even say that the keyboard, for once, is a perfect accompaniment for the music in nearly every facet. What makes this album all the more terrific is its length - just under 35-minutes, a classic "Get-in-say-it-get-out" scenario that doesn't overplay its hand and keeps the dramatics to a near-perfect minimum.

I have to say, I'm honestly glad I was able to hear Númenor in all of its splendor; it gives me a small beacon of hope that all black metal in this style isn't going to be colossal waste of time. The band is spot on with its delivery and presentation of the so-called 'epic' black metal music, so please check them out if you like your BM with a flair for the dramatic without being saturated in mediocre nuances.

I might be an anomaly; I do love to be proven wrong when I give up on a certain style of music and someone comes along and shuts me right up.