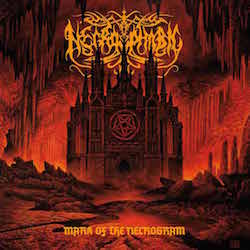 Necrophobic have a strong Dissection influence that they carry on their sleeves and put at the forefront of their music. This is still a very unique recording with a one of a kind sound, however. The music is mostly black metal in nature, but carries forth the strong vibes from other genres like death metal as well. There is a very impassioned stance that the band takes and makes for a fiery listen.

The guitar riffs are scathing and powerful and resonate strongly through the listening experience. On top of this are spiteful vocals that nicely fit upon the top of the music and provide a Dissection like aura to the band. In fact, this music is very similar to that outfit, but perhaps takes on a bit more of a death metal feel to it. I believe this album is better than the similar Watain release from this year and maintains a greater atmosphere than that band does. It requires a very silent room to hear the splendid nuances this release has and this is the setting that should be used for Mark of the Necrogram. This is still not a perfect release. Since it sounds so similar to the band mentioned and also Hyperion’s 2016 release Seraphical Eupnony, there needs to be something original to separate this band from those acts. There is nothing groundbreaking here and this only sounds like another good album from the style, but nothing greater than that.

It’s still a very powerful experience, but it lacks the extra little something that would make it even greater. Still, this is a highlight from early in the year and should be heard by both likers of black metal and death metal. It gets a moderate recommendation from me and a plug to check out the work of Dissection and Hyperion.