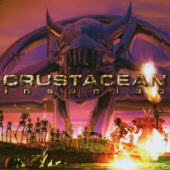 Was it a matter time? Could the metal world ever avoid a possible unholy alliance of metal and well... umm... computer games? Well the world we live in is a certain cesspool of technology and an ever-increasing breakdown of society and people interacting with one another. The time had to come where the worlds of metal and videogames met, and that time is nigh.

The aptly titled 'Arena: QIII: A' bursts onto the scene with none other than an intro from the highly acclaimed first person shooter game in Quake 3 Arena. Following the short spout of mechanical mumbo-jumbo, Crustacean burst onto the scene touting a BGF adrenaline soaked shot of thrash metal ala Slayer and some Pestilence influences.

The name Slayer haunts me. I really, really dislike their music. When I read the press statement to Crustacean as sighting Slayer as influence, I must admit I was a bit turned off and form preconception after preconception before actually hearing "Insaniac." Once I got the actual record in my player, I was not initially impressed. 'Carbon copy Slayer thrash' was about the gist of my thoughts at the time. Following a week or so of Crustacean free listening I figured I may as well whack on "Insaniac" another time, (considering I was going to eventually review it sometime) and suffice to say my experience with "Insaniac" was a whole lot better. I can limit this to two possible reasons; either my tolerance of Slayer rose by some quite lofty standards, or Crustacean are actually a pretty competent outfit. Thankfully it was the latter (or at least I hope so, as I couldn't really abide myself tolerating Slayer, let alone enjoying their material).

In a nutshell, Crustacean are a band that 80s thrash metal-'eads will –want- to check out. "Insaniac," despite being about blowing the shit out of people in computer games is a pretty infectious and addictive blend of all good things thrash, and contains enough interesting leads and varying tempos to put a smile on your dial. Hell, even I enjoyed bits and pieces of "Insaniac."

Bottom Line: If you are a computer game geek and like Slayer, then fuck me if Crustacean aren't your digital messiah, for the rest of us 'normal' people, "Insaniac" has some pretty solid moments.