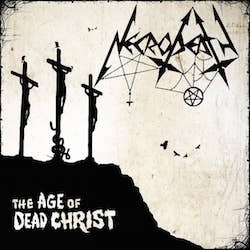 ::   ::
Type: Full-Length
Release Date: March 9th, 2018
Label: Scarlet Records
Genre: Black, Death, Thrash
1 The Whore Of Salem
2 The Master Of Mayhem
3 The Order Of Baphomet
4 The Kings Of Rome
5 The Triumph Of Pain
6 The Return Of The Undead
7 The Crypt Of Nyarlathotep
8 The Revenge Of The Witches
9 The Age Of Dead Christ
MetalBite on YouTube

Music fulfils its purpose whenever it evokes strong emotions. Some fine songs are simply good and that's it, but only a few bands have the skills to add an extra dimension to their compositions. Fortunately, the veterans of Necrodeath know their trade. Many of their albums have combined style and violence, sharpness and melody - and many songs of Italy's finest export in terms of steel have entered my metallic hall of fame, because they exactly possess this specific feature, a sort of emotional intelligence. The Age of Dead Christ reveals this characteristic as well. Maybe I am a just an uncritical fanboy, but Necrodeath get the hang of it. Already the stylish artwork and the revitalized old band logo awaken my curiosity and its sinister, religious yet lethal aura reflects some of the interesting lyrics. "The Order of Baphomet", for example, picks up the (anti-) religious idea and summons the listener to think freely without dogmatic restrictions. Peso and Flegias have written intelligent lines that refer to historical situations like a witch trial and allegoric elements enrich the lyrical side of the album as well.

But it gets even better. In terms of musical vehemence, Necrodeath do not slacken the reins. Some aggressive, sharp and fast eruptions have found their place on the eleventh full-length. By contrast, "The Triumph of Pain" stands in the tradition of their less angry, rather atmospheric pieces (remember, for instance, the excellent "Master of Morphine"). I admit that they have already penned better mid-paced tunes, nevertheless, The Age of Dead Christ does not fall short of expectations. Therefore, I regret that its playtime does not exceed the mark of 33 minutes, but I also know that a compact output is better than a 60 minutes work which gets boring at the end. Nonetheless, it is a pity that "Headhunting", their great single track from 2015, is missing. Instead, they have rerecorded another classic from their first albums. "Return of the Undead" takes us back to the provocative and evil first steps of the band. I can promise that it has lost nothing of its vileness and brutality during the last three decades.

As already mentioned, the Italians still focus on fury, but their well-known morbid elements are integrated as well and the same applies for some weird, sometimes psychedelic guitar lines. Especially the highlights, for example "The Crypt of Nyarlathotep", leave no doubt that the band knows how to connect outbursts of anger and melodic sections. This results in a coherent number with great tempo changes and a very dynamic overall impression. The trademarks of the dudes - the charismatic screaming of Flegias, the sometimes-oppressive harmonies, the thrashing rage and the percussion gimmicks of Peso - still shape their art and lend them a great degree of individuality. Speaking of "Thrashing Rage", you know that this is song title of Voivod and Necrodeath call these legendary Canadians one of their biggest influences, but fortunately they are less eccentric and innovative than the dudes from Quebec.

As always since the comeback, the production shines with clarity and power. These guys are no amateurs. Even the most intensive parts of shocking outbursts like "The Master of Mayhem" do not reveal any sound problems in terms of transparency. However, this is not a sterile record. Already the raw and passionate voice of Flegias ensures that the compositions cannot be described as soulless or polished. The Italians still convey the feeling of thrash metal in a very authentic manner and this is no matter of course after all these years. But Peso and his comrades do not show any signs of fatigue. They stand up against the young challengers in their homeland like the phenomenal Surge Assault - and they still present music which evokes strong emotions.