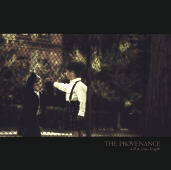 The Provenance won’t be the first band to pick and choose which styles they like and then blend them all together, and they won’t be the last. Some bands use it as an easy way out, and others make it seem like it’s the difficult way in. It’s only what you make of it, after all. The Provenance succeed it making their second album, “Still At Arms Length,” a good remedy for those looking for another “mishmash of genre’s” type band.

The reason that “Still At Arms Length” is so quality is because The Provenance really know how to blend the styles well so that it almost comes off as a new style (although you know it’s not), and because their composition abilities are top-notch. We all know how unbearable it can be to wade through the muck of and poorly written song, where you’re just about convinced you’ve been listening to short samples of individual songs without any coherence or flow. But, like I said, that’s not a problem for The Provenance.

Amongst The Provenance’s music are a few standout styles. Doom metal is definitely an active participant in this. My Dying Bride immediately comes to mind, when listening to “Still At Arms Length.” Yet The Provenance don’t sound like they were schooled at the My Dying Bride camp completely, and aren’t just a second-rate imitator. Other acts that rise up amongst the name-dropping are Anathema, both old and new, and The Gathering. And to save the most well known reference for last, Opeth. The Provenance is quite big on quiet acoustic passages and lighter moments. Even the song writing strongly stands paralleled to Opeth. The heavy, melodic segments interlaced with the smaller emotional ones.

At the same time, The Provenance manages to not sound exactly like any of the aforementioned bands. It might be due to the excellent job in making all the influences sound cohesive, or it might be The Provenance’s style, and use of other instruments. By style, I mean that The Provenance genuinely have a sound that is their own. Much like I could gather a band together and do a cover of an In The Woods song, but it wouldn’t sound like In The Woods. Also, The Provenance’s use of keys, some flute, and a beautiful female vocalist only help to heighten their position.

Bottom Line: If you’re looking for a quality band and have enjoyed anything from any of the bands that have been mentioned, then by all means, make “Still At Arms Length” one of your first stops.