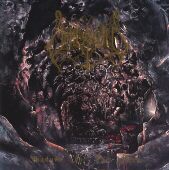 I have always been a great fan of "Before the Creation of Time" since I have heard it for the first time. This song of the debut alone was reason enough for me to await the second full-length of Unleashed eagerly. Shadows in the Deep redeemed me and generally speaking, the album met my expectations. The quartet did not release an overwhelming classic, but a good album. Back in 1992, I really enjoyed it, but I must say that it did not stand the test of time in all respects.

Okay, it was always obvious that Unleashed's kind of death metal has a certain pop appeal. This is not to say that their songs could be embedded in the disgusting program of your local radio station. The Swedes deliver the fundamental brutality and power in order to hold high the banner of their sub-genre. Nevertheless, the showpiece of the full-length, "The Immortals", combines primitiveness with catchiness in a nearly embarrassing manner. It sounds like the death metal counterpart of "United" or "Living After Midnight", only a little bit better. However, Unleashed do not need this overly simple, almost greasy structures. They also have written good pieces which do not focus on a drunken open-air crowd that wants to be entertained in the simplest manner.

Especially "Onward into Countless Battles" with its impelling riff shows the real skills of the group. Sawing guitars and a simple melody form a mid-tempo verse which is followed by an eruptive instrumental part. The middle section is enriched with atmospheric sounds of raging waves, before the verse reappears. One might say that the song does not hold anything special, but everything fits together and paints a coherent picture. For those who prefer a more furious kind of death metal, I recommend the straight, short and swift "Never Ending Hate" and "The Final Silence". Without any detours, they attack the listener directly. But frankly, this is no album for speed maniacs. Unleashed have recorded tons of mid-tempo sequences and the strength of this work is rather its ominous aura than an overdose of velocity. No doubt, the bone-breaking "Crush the Skull" hails the Gods of speed, but all in all, the album has some very viscous tunes as well. Even after more than 25 years, I am still undecided whether "Bloodbath" is quite casual or just boring. The deep, more or less dull sound tends to the latter. This results in an album which fails to spread a really vibrant aura.

Be that as it may, "A Life Beyond" with its drilling guitar at the beginning and the fast outbreaks should be part of your "Best of Swedish death metal" compilation. Here are no signs of mainstream death metal. Instead, pure darkness prevails, and the title track runs in the same vein, although it could have been optimized by giving it some rabid sections. However, if one likes the upright approach of Unleashed in general - Johnny's raw, sometimes slightly uninspired voice, a relatively low degree of brutality, easy but suitable patterns and no integration of foreign influences -, Shadows in the Deep is, as mentioned in the first paragraph, a good album.