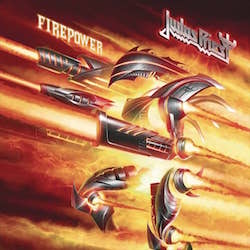 Firepower from Judas Priest is a very well written album. It's mind-blowing to know that after 49 years of releasing solid and highly influential music, Judas Priest can still bring forth something this outstanding. Rob Halford's vocals on this album sounds as though he had recorded it in his younger years with the band, notably the British Steel era. Yes, its that good. The guitar solos from Tipton and Faulkner are very well composed and really have a striking 80's era feeling. The drumming ranges from fast to slow to mid-paced which at times makes it predictable when the guitar solo would kick in. Firepower is about 58 minutes long, but time moves fast when listening to it; and once its over you're left yearning for more. Most of the songs are very memorable thanks to the majestic guitar work from Faulkner and Tipton and of course Halford's absolutely commanding vocal deliveries.

Songs such as 'Firepower', 'Traitors Gate' and 'Spectre' happen to be my favorites on an album in which every track competes to be the best. Most of the album is mid-paced with Firepower being the fastest track on the record. Personally, I think Halford's screams sound better on slower tracks; it has been that way since I first heard Victim of Changes on Sad Wings of Destiny. Firepower evokes feelings of hearing their earlier material especially with songs like 'Never the Heroes' and 'Spectre' which reminds me of 'Night Comes Down' off  Defenders of the Faith. The album closes with 'Sea of Red' which begins with an acoustic guitar and gracefully builds towards the end with the electrical guitar being introduced.

Overall the album is an excellent entry into an already prodigious catalog by a band that refuses to step down from the throne. Judas Priest seems to have tossed kerosene on a flame that has never ceased in burning bright with passion for the genre. Firepower serves as both a special release for the die-hard Judas Priest fans and newcomers now discovering the band. I am absolutely looking forward to the next album Judas Priest has to offer the metal world given the stunning musical performance displayed on Firepower. At the current echelon of Priest's career, one must acknowledge the fact that they sound just as good as they did 34 years ago; which is quite an amazing feat to accomplish after performing live and releasing albums for nearly half a century. Long live the Priest!

The historical tap of the last 38-years of my life have re-emerged by way of the latest Judas Priest offering, Firepower. Admittedly, after the abomination that was Nostradamus and the better, albeit lackluster followups, I wasn't expecting much from the aging vehicle that is the Birmingham quintet. Dare I say I was almost dreading hearing it. However, as I always say in the most self-deprecating manner possible, I'm always happy to be proven wrong.

Firepower,in its basest form, is a much-heralded call back to the glory days of NWOBHM and British metal in general; the road paved by Black Sabbath, Priest, Saxon, and a slew of other like-styled bands forged a solid foundation with which to stand all of those years ago. Sadly, timing and lack of long-term vision sent many of the lesser-known bands packing into the nether of anonymity, with only the truly magical among the fray able to emerge and withstand the coming years of changing genres, MTV intrusion and the era of downloading and streaming services. Judas Priest has carved for itself one hell of a long and mostly brilliant highway in the grand pantheon of metal music. I'm happy to say that the band still has some incredibly creative sparks going for itself in this recent offering.

Rather than breakdown tracks individually, I like to take a different approach in finding the overall mood and feel of a given album, especially if it's from a band that has been so dear to my heart (good, bad and befuddling) since 1980. For my elder ears, Firepower offers a familiar and comfortable catalyst back to a time when heavy metal was all about crafting and style and less about conformity and marketability. Make no mistake, I'm not saying they nestle into a chasm of forced familiarity; the band just knows what formula has always set them apart from the casual observers. Rob Halford has managed to use that resonating mid-range tone to its best plateau, despite being somewhat limited by Father Time. The high notes aren't as prevalent as, say, “The Sentinel” or “The Ripper,” but, again, style over conformity. Too many bands attempt to recapitulate on former glories to a usually embarrassing level, but Judas Priest manages to utilize its storied status of “legends” to its fullest potential. Knowing when to work within your personal limits is always the first step to keeping up the proverbial Jonses.

Firepower manages to offer up some of the finer work that Priest has put out since the now-distant Painkiller days or yore. Musically, the band is on-point, coveting and shaping that familiar guitar tone to a perfect, leathery shine. The effects of K.K. Downing being gone aren't nearly as fluid as they were when first he left the fold; Richie Faukner  has all but solidified his place in Judas Priest history by adapting to an otherwise hostile fan base questioning and scrutinizing his every note. His presence on this latest record is, without question, one of the positive elements that make it so damn good. Glenn Tipton, of course, is blazing as always, which is bittersweet now considering his recent news of his Parkinson's disease becoming too hard to muster through. I suppose that makes this album all that much sweeter, knowing how much suffering was actually put into it. That said, no amount of nostalgia could get me to lay praise to something subpar or less than acceptable in such a strong lineage. Thankfully, Judas Priest has managed to just go with the proverbial flow and create another powerful album.

The songs here are your “typical” Judas Priest style heavy metal, with incredibly memorable riffs that nicely round out the overall sound. The one track that keeps coming back to me is “Spectre,” a heavy, pounding entry into what can only be described as a journey into the inner workings of a tempestuous visage created by veterans who know exactly what will work and what would be contrived lethargy. Thankfully, other than one full-on misstep, Priest has never really failed to accurately put across its collective vision, and Firepower is no exception; rather, it's a nice glance backward to a time when metal music was both reclusive and deeply personal for those of us on the outer fringes of society. It's always been ours to covet, and Judas Priest has always been one of the larger-than-life wielders of the well-worn battle flag for heavy metal.

Other standout tracks that immediately pop into my head are “Lightning Strike,” “Children of the Sun,” “Necromancer” and “Sea of Red.” That said, there isn't a weak track to be found anywhere on here, and I am more than pleasantly surprised to like it this quickly. This is a feeling I haven't had with Judas Priest since 1984 with Defenders of the Faith, an album that was sheer perfection for me, and it feels really good to put this on repeat.

Judas Priest is a legend, we all know this to be an indisputable fact among those of us who are true metal fans, old and young. Sadly, not many legends hold up the lineage to any sort of acceptable or worthy standard, preferring to just keep churning out mediocrity and phoning-in the latest effort to live off of the status given to them (I'll mercilessly leave the names to your own imagination and assessment). If my two cents is worth anything here, get out and grab a physical copy of the latest JP and allow yourself to be taken back to a time when everything heavy was easily discernible and welcomed. This is going to be a nice addition to the already-fantastic Priest discography, straight from the cold, overcast umbrella of England's machine-belching Birmingham area.