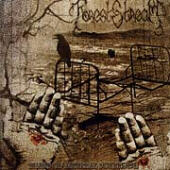 From the gloomy depths of Russia comes another one of Elitist Records promising young bands, Forest Stream. It’s nice to finally come across an album that has quality stamped all over it. Forest Stream’s debut, “Tears of Mortal Solitude,” may not be the most original thing coming out, but what comes first is quality, and it is in abundance here.

If you haven’t picked it up from the album cover, title, and band name, Forest Stream play a type of blackened doom metal – symphonic, at that. Let’s start with the doom. Forest Stream’s music largely resembles that of the early 90’s doom metal stalwarts, My Dying Bride, Anathema, and Katatonia. The dark and depressive nature of “Tears of Mortal Solitude” as well as a lot of the rhythm guitar is what makes so doom. In fact, I can’t help but to think of Forest Stream as having a lot in common musically as My Dying Bride. They’re not exactly the same, but the way the songs are constructed – multiple ideas, lengthy arrangements, etc. – as well as the keyboards and use of melody is just very similar. As for the black metal, I suppose it’s just the overall feel of things on “Tears of Mortal Solitude.” You’ve got your black raspy vocals, of course, but also some black metal riffing, as well as an atmosphere that is most likened to walking through a graveyard on a very foggy evening. Their keyboards don’t hurt either.

Forest Stream’s strongest trait – besides that the musicianship here is pretty strong – is that they integrate a lot of great melodies in their songs. The guitar and the keyboards share the leads, and fairly evenly at that. If the keyboards aren’t at the forefront, they’re in the background providing that black metal feel, and if they are taking control of the show, then the guitar is without a doubt somewhere in there as well. The melodies on “Tears of Mortal Solitude” are great, really. It’s great to not just have blackened doom metal that pounds away with their rhythm guitarist and fails to engage the listener otherwise, but to have a band that succeeds in both areas.

The only thing to really complain about with Forest Stream is that with the use of so many ideas in each song, it has a tendency to lose the cohesiveness of a song. Forest Stream never goes storming off path with any stupid moves in composition, but there is room for improvement. Otherwise, I just wish that the lead guitar had more of a piercing sound, or a sound that could really grip the listener and stand out amongst the dense barrage of keyboards, rhythm guitar, vocals, and whatnot.

Bottom Line: “Tears of Mortal Solitude” is more than a good release, yet at the same time it’s not amazing. Don’t let that keep you away though. To pass up something this good would be a shame, so check it out.