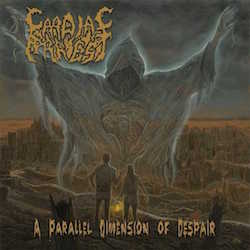 As I have woefully lamented countless times before, Chicago is horrifically underrated in terms of its deep-seated value to the metal scene, both past and present. Anyone that knows me and is familiar with my reviews knows the many bands I espouse the virtues of in these hallowed paragraphs, so I'll refrain from overselling the accolades. That said, the new Cardiac Arrest CD has finally arrived in my sweaty, time-weathered hands, and I raced to the CD player (as much as a man pushing 50-years-old can) and popped in the circular aphrodisiac, awaiting the familiar sounds of dense, dismal dirges of forlorn death and despair that the band is so famous for issuing. I am a willing sentient...

If there is anything I enjoy most on this horrific plane of existence, it's a death metal offering that wanders effortlessly into the darkest regions of the mind and manages to pull out the brutality and savagery of the genre without lending itself to pretension or musical semantics, and A Parallel Dimension of Despair is exactly what I knew was going to spill out into the large air of my music man-cave. Cardiac Arrest is, quite honestly, a band without any need for parlor tricks; that is, they rely merely on the darkest and ugliest parts of death metal to construct and disseminate a truly engaging slab of volatility. These guys have their fingers directly on the pulse of the movement, and they don't relent one iota.

All adjectives and gushing aside, this latest opus from these local legends is musical proof that some bands, given the right cogs and easy uniformity, can not only keep going in an otherwise crowded and vastly under-looked genre, but can get better with each release. From the earliest bites of 2004's EP, Heart Stopping Death Rot, Cardiac Arrest simply couldn't disappoint any death metal fan if they tried; from the seasoned vet in the battle-worn vest, to the embryonic fan base discovering the seedier side of heavy metal, there is something overtly encompassing to be had in every one of their releases, and this one is the best of the crop.

Opening with “Immoral and Absurd,” there is little question that the band has grown even tighter and more venomous since 2014's And Death Shall Set You Free. While the familiar sonic filth that surrounds any C.A. release is still in abundance throughout, I do notice that the production has gotten even better, with every instrument nicely represented in the mix, taking absolutely nothing away from the sickening aura overhanging the room when you have this blasting through your palatial estate. That little tidbit aside, the songs themselves are just incredible, both lyrically and musically. I have listened to this CD twice in a row at the time of this writing, and I can honestly say that this is my favorite release of the short year, and it will take one hell of a record to top this for me. I will further state that the one track that just rattled around my head for a while was “When Murder is Justified,”a happy little ditty that moves along rather slowly, even hauntingly Hammer film-like, only to be jettisoned like a decapitated head into your lap with its sheer force and relentless assault. As the pace picks up and finds the horrific growling chants of “Kill...kill...is all you ever do!” you come to the dank realization that this is something so sadistically beautiful, and the art of  murder has never sounded so appealing. Provided I don't have any law enforcement agents kicking down my door after such reckless abandon posing as praise, I will say that every single track on this album is top-notch death metal that most only dream of creating on such a high level, and that's just a fact. Even when the band slows the pace (”This Dark Domain”) the overall feeling of sadism and viciousness is rife within. There isn't a weak track anywhere!

What sets A Parallel Dimension of Despair apart from the other more recent albums in the genre is that Cardiac Arrest knows just what it takes to create music so perfectly symmetrical, yet dynamically different so as not to fall into a pigeon-hole of repetition. Death metal being a very regimented state of oft-familiar sounds, it's always a pleasure to hear a band that not only enhances the genre with veritable ease, but manages to elevate it to a hierarchy of tempestuousness and barbarism criminally lost in the occasional fog of ineptitude. If you are a fan of death metal done precisely how it was meant to be enjoyed, you need to seek out this slab of total perfection!