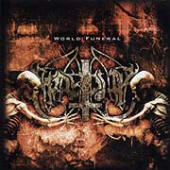 After the not-so-good record La Grande Danse Macabre, Marduk struck the black metal scene with World Funeral in 2003. The eyes of black metal enthusiasts and critics are always on heavyweight bands like Marduk when they issue new material. Particularly; when the previous effort was flawed. The biggest sins of Marduk in their last record were track-listing order, immature songwriting, and inconsistent musical ideas. World Funeral seems to improve the weak aspects mentioned before but also develop relevant ideas that will be predominant in upcoming releases.

"With Satan and Victorious Weapons" hit you in the face after a short-spoken intro of a guy possessed or inspired by the devil. The album starts strong with this track because it addresses all the violence and bloodshed that represent the classical sound of the band. It is an improvement to unleash hell from the very beginning because you get engaged, and expectations grow high. The pace of the record is dynamic due to the rotation of fast-tempo songs with slow bangers. Thus, regarding track-listing and overall flow of the album is an advance from La Grande Danse Macabre. Did I say slow songs? It is ok, don't worry; the mid-tempo tracks in World Funeral are written better compared with the previous effort. One clear example is the song, Bleached Bones. Probably the best melodic-oriented riff that Morgan wrote on this record. Something to clarify is that Marduk does not want to be Gothenburg melo-death. The melody address here is more on the gloomier side of the spectrum, delivering very hooky and catchy riffs.

Musically speaking, the war machinery of the band is well-oiled and works accurately in all departments. Morgan guarantees a tone of high-quality riffs in this album. He gets out of the tremolo-picking style comfort zone to deliver hooky guitar melodies. The bass gets its time to shine from song to song, notably in the slow tracks. Legion is a demon in the screams and never disappoints; his voice range accommodates the song's pace and atmosphere. In the drums, we have a new musician because Fredrik left the band shortly after the release of La Grande Danse Macabre. Emil Dragutinovic took over the drum kit for World Funeral and the next album. He decently complies with the job, blasting when he has to and slowing down when the song requires.

Lyrically the growth is evident and themes back to a more sinister approach. The previous record suffered from childish concepts that did not represent the legacy of Marduk in the black metal scene. Ludicrous lyrical themes always tend to permeate music in general. However, in a black metal act, the aim is to be evil and uncompromised with morals and political correctness. Without leaving behind quality principles of songwriting, the lyrics in World Funeral return to form and seems to get out of the Satan worship standards to embrace other issues like death, mass extinction, and blasphemy. I would dare to say that this album would have been a better logical closure for the trilogy tributed to "Blood, Fire, Death" Bathory's seminal release.

Altogether, World Funeral is a tighter record representing a coming back to form in the band's discography. In the songwriting department, there is an improvement; songs range from mid-tempo bangers like Bleached Bones and Castrum Doloris to fast and aggressive ones like Hearse and Cloven Hoof. The variety of song structures is appropriate and flows correctly with the general tone of the album, which feels authentically evil. Finally, the ideas posted here, both musically and lyrically, will be developed thoroughly in upcoming releases.

Throughout Marduk's career one thing was always certain. With each album that they've produced, they've pounded our brains with hate-filled blistering assaults, improving their black metal craft each time. While some albums were slightly below their standards, most of Marduk's work pushed the black metal genre into higher levels and ultimately made them one of the more important acts in the metal scene. Their latest creation, "World Funeral," – which is already their 8th opus – puts forth an immense dose of ultra-violent aggression with devastating blast-beats, and a newfound diversity that is stronger than ever.

After their previous release, the somewhat slower and more monotone "La Grande Danse Macabre," Marduk returns to the relentless onslaught with World Funeral." However, speed is not the only thing that Marduk has to offer here. Almost every other song is divided by slow to mid-pace ones that don't take anything away from brutal atmosphere, but only add to heaviness and overall majestic feeling of the album. Even though 'Bleached Bones,' 'To The Death's Head True' and 'Castrum Doloris' are a couple of the songs that were taken back a few gears, those songs are no less powerful than the skull crushing opener opener 'With Satan and Victorious Weapons,' 'Cloven Hoof,' 'Hearse,' or 'Bloodletting'.

The whole album is built around very heavy and well structured riffing supported by a powerful rhythm section, courtesy of their new drummer Emil Dragutinovic. This man not only replaces the legendary molester of the skin, Fredrik Andersson, but does it in such a way that you won't even notice a change in musical skills. One thing that you will notice is something that has recently been getting lost in Marduk's camp – the enjoyment of playing. It might be combination of new blood in the band, perfect production and top-notch compositions, but "World Funeral" brings out elements that remind me of hungry and enthusiastic young musicians recording their first album, but this time with 12 years of stage experience and powerful but crystal clear production.

Bottom Line: If "World Funeral" is any indication of the current condition of the black metal scene, then contrary to many opinions, this genre stands as firm as it was in its golden days. Once again Marduk deliver a product of the highest quality that will desecrate your body and torment your soul until your very last breath. And that's just where the world funeral begins...